Prime minister Davutoglu travels to the Philliphines after the G20 summit to monitor the peace process that has come after the end of a 40 year war. 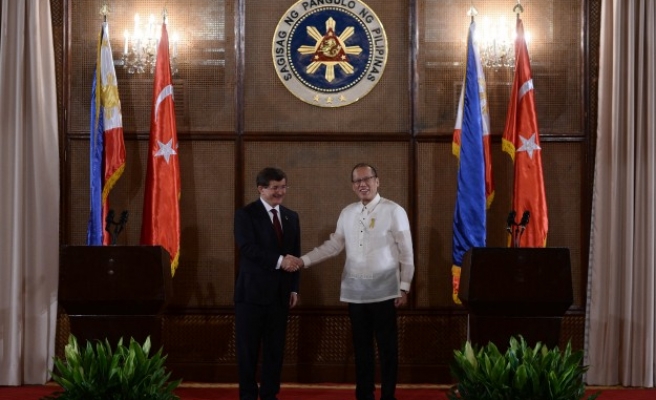 Davutoglu promised to back the process that aims to end a decades-old armed conflict in the Muslim-majority south, broadcaster PTV News said.

The report said Davutoglu had promised that senior diplomat Haydar Berk would focus on the disarming of the Moro Islamic Liberation Front, as agreed by a peace pact between the government and the Front, once the largest group fighting for greater autonomy in the southern Philippines.

Berk, a former permanent representative at NATO, has been appointed as chair of the Independent Decommissioning Body. The body comprises of foreign experts to assist in the dearming process.

"I have instructed him [Berk] to stay in the Philippines and, if needed, don't come back to Turkey until you finish this job," Davutoglu joked during a lunch hosted by President Benigno Aquino III, the GMA News website reported.

Davutoglu praised the Aquino government's "very wise, visionary approach to integrate all the country for the same objective of peace, stability and prosperity."

He added: "Turkey will always be at your side in this very important initiative. We are proud that you invited us to be part of this process.”

It is the first official visit to the archipelago by a Turkish premier and marks the 65th anniversary of diplomatic relations between the two countries.

The leaders are expected to sign an agreement on air transport during Davutoglu’s two-day visit.

The agreement between the government and the Front will create a new autonomous political entity called ‘Bangsamoro’ that will replace the Autonomous Region in Muslim Mindanao.

The southern cities of Bangasmoro, Mindanao, Sulu Archipelago,Palawan, and Basilan for years have been fighting with armed Muslim organizations that operate under a central system which this past Spring had finally agreed to rest arms and agree to a peaceful resolution. After 40 years of war a peace agreement was signed by the factions in March 2014, whereby the process was closely watched by Turkey.

A comprehensive agreement in favour of both sides is expected to pass congress. The Philipino government will establish a temporary government until this happens.

This temporary government will be in place until the 2016 elections completing the actual time for the agreement to be put in place.