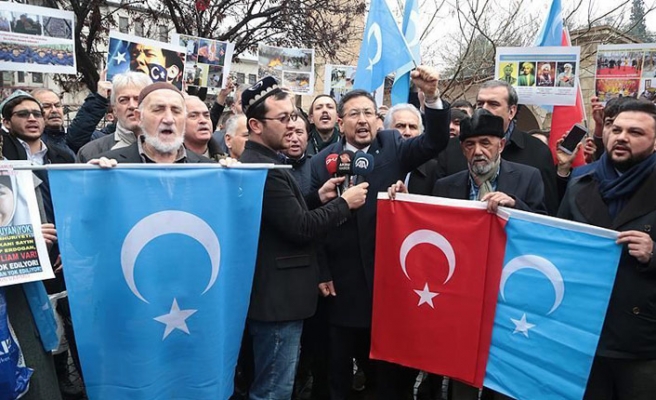 A program to promote Intangible Cultural Heritage of Uighurs in Kazakhstan was held in Turkish capital Ankara on Tuesday.

The event on the project of intangible cultural heritage was held by Turkey's Presidency for Turks Abroad and Related Communities (YTB) in cooperation with Haci Bektas Veli Nevsehir University in Turkey, Kazakh State Women Pedagogical University and Suleymanov Oriental Institute.

Speaking on the event, academician Adem Oger said in the 19th century, Uighurs migrated to especially Kazakhstan, Uzbekistan, Turkmenistan and Turkey due to economic, social and political reasons.

Later in the 20th century, the Uighurs moved to Europe, the U.S. and Arab peninsula, Oger said adding according to a data from 2004, while a total of 246,000 Uighurs stayed in Kazakhstan.

Uighurs who started migrating to Kazakhstan in 1860s mostly populated in between Kazakhstan's southeastern Almaty city and Khorgos in Xinjiang -- an autonomous territory in northwest China.

Uyghur people in the world mostly live in Xinjiang -- an autonomous territory in northwest China, he noted adding Kazakhstan is the country where Uighurs are most populated after East Turkestan, referring to the area, also known as Xinjiang.

In accordance with UNESCO's Intangible Cultural Heritage criterion, the project was carried out to protect cultural heritage of Uighur, including oral narrative tradition, performance arts, social beliefs and rituals as well as traditional handicrafts, he said.

As a part of the project, a book was published and a documentary film was shot about cultural heritage, he noted.

Also speaking in the event, Kazakh ambassador to Ankara Abzal Saparbekuli said: "For us, all nations who are living in Kazakhstan is a citizen of us regardless of their religion or race,"

Uyghurs have a special place among people who live in peace in Kazakhstan, the envoy noted.

China’s Xinjiang region is home to around 10 million Uighurs. The Turkic Muslim group, which makes up around 45% of Xinjiang’s population, has long accused China’s authorities of cultural, religious and economic discrimination.

China stepped up its restrictions on the region in the past two years, banning men from growing beards and women from wearing veils and introducing what many experts see as the world’s most extensive electronic surveillance program, according to The Wall Street Journal.

Up to 1 million people, or about 7% of the Muslim population in Xinjiang, have been incarcerated in an expanding network of “political re-education” camps, according to U.S. officials and UN experts.

According to the 117-page report, the Chinese government conducted “mass arbitrary detention, torture and mistreatment” of Uighurs in the region.