The Turkish and Azerbaijani foreign ministers stated on Wednesday that they were unpleased with the OSCE Minsk Group's studies in finding a political solution to the conflict in Nagorno-Karabakh involving Armenia and Azerbaijan. 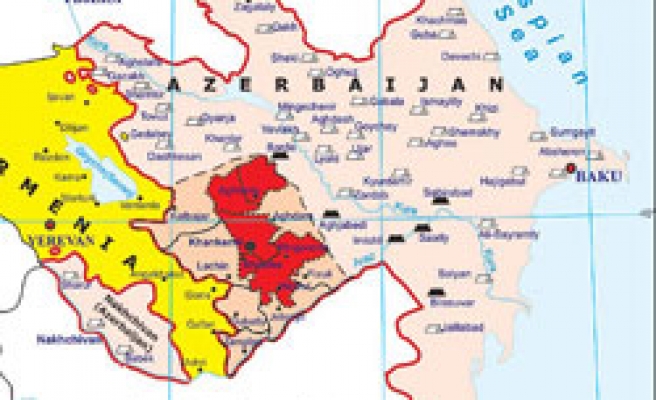 Turkish Foreign Minister Ahmet Davutoglu and his Azerbaijani counterpart Elmar Mammadyarov stated on Wednesday that they were unpleased with the OSCE Minsk Group's studies in finding a political solution to the conflict in Nagorno-Karabakh involving Armenia and Azerbaijan.

Paying an official visit to Azerbaijan, Davutoglu held a joint press conference with his counterpart Mammadyarov and evaluated the solution process of the Nagorno-Karabakh conflict between Azerbaijan and Armenia.

Underlining that Armenian soldiers should leave Nagorno-Karabakh, Davutoglu said "Turkey is consistently in consultation with Azerbaijan as it has always been and from now on we will continue to support the fair approach of Azerbaijan".

Reminding that the Nagorno-Karabakh conflict had not been solved for over 20 years and Azerbaijani lands have still been under occupation, Davutoglu said "it is time for the international community to evaluate it".

Davutoglu said, "The Minsk Group has made an effort on this issue over 20 years and we appreciate those efforts but they have not given any results. Everyone should question the causes of the failure and co-chairs should play more active roles. The members of Minsk Group should take actions, too".

"Turkey is also a member of the group but as co-chair has carried out the process Turkey cannot give enough contribution to it. Turkey will support every positive step to solve the issue," said Davutoglu.

The Minsk Group spearheads the OSCE's efforts to find a political solution to the conflict in and around Nagorno-Karabakh involving Armenia and Azerbaijan.