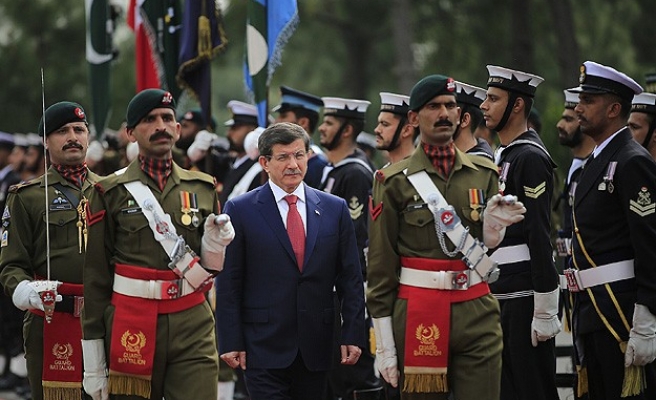 Davutoglu is visiting Islamabad between Feb. 17 and 18, where the fourth meeting of the Pakistan-Turkey High Level Strategic Cooperation Council will also take place. This will be the Turkish premier's first visit to Pakistan since assuming his post in August, 2014.

The council meeting is expected to focus on trade, energy, communications and transport, education and culture sectors.

"Turkey has a very rich experience in infrastructure projects and there are many good and prominent Turkish companies investing in projects in Pakistan," Aziz said.

He said Pakistan wanted both countries to expand their trade cooperation further.

"In the last few years, the number of Turkish companies active in Pakistan increased," he said. However, the trade volume has been reduced because of Turkey’s increased duty on textile, he added.

According to the Turkish Statistical Institute, the trade volume between the two countries was $695.3 million in 2014. Aziz said that in 2011, the trade volume reached to $1 billion, but then it decreased to $800 million, and now it was around $600 million.

"We are negotiating with Turkey for the possibility of a free trade agreement that may allow duty free imports," Aziz said.

The Pakistani defense minister expressed satisfaction at the close defense ties between the two countries.

"The cooperation in the defense sector is at a high level between Turkey and Pakistan; we share everything. Pakistan buys military equipment from Turkey and there are also joint workshops between the two countries. Davutoglu's visit will make bilateral cooperation even better," he said.

In Sept. 2014, Turkish Aerospace Industries delivered the last four out of the 41 upgraded F-16 fighter jets to Pakistan as part of the "Peace Drive" program between the two countries.

About a three-way regional cooperation process between Pakistan, Afghanistan and Turkey known as the "Istanbul process," Aziz said, "Turkey has been a very strong supporter of Afghanistan in the last few years because of its cultural, religious and economic links."

He stressed on Turkey’s role in the reconstruction of Afghanistan.

"The most significant initiative of Turkey was the Heart of Asia Istanbul process, which brought together 16 members and 50 observers in China," he said.

According to the initiative's official website, the Istanbul process provides a new agenda for regional cooperation in the “Heart of Asia” by placing Afghanistan at its center. The process is aimed at achieving a sincere and result‐oriented cooperation for a peaceful and stable Afghanistan.

Aziz added that all the countries in the process had unanimously endorsed the need for stability in Afghanistan.

About Afghanistan and Pakistan relations, Aziz added, "We have adopted a policy of non-interference. Afghanistan should resolve its problems by itself. We can help Afghanistan in reconstruction and development."

The Pakistani defense minister also said that the recent massacre of children at a school in Pakistan’s northern city of Peshawar had brought a sense of urgency in the country to deal with the menace of terrorism.

"We are pursuing the same doctrine but it has definitely added a sense of urgency, a sense of shock that something has to be done at a national level… we have also a long term plan that will change the ecology of terrorism in our region," he said.

He said Pakistan and Afghanistan had cooperated before too, but the Peshawar tragedy had now increased the level of cooperation.

Khawaja said Pakistan was ready to help Afghanistan’s military. "It will be a breakthrough if we provide technical help to our Afghan brothers to cope with the vacuum after the withdrawal of international forces."

He acknowledged the trust deficit with Afghanistan in the past, but said there was now a headway after the 2014 presidential elections in Afghanistan that made Ashraf Ghani the new Afghan president.

"The level of trust has increased tremendously in the last four to five months. Frequent exchanges between heads of states and the top military bodies have helped the peace initiative in the region," he said.

The minister also highlighted Turkey’s role in breaking the ice between Pakistan and Afghanistan, and appreciated its positive role.

Turkey has played a key role in Afghanistan and is expected to continue its peacekeeping mission. In Jan 2015, the Turkish parliament authorized the government to continue posting Turkish troops in Afghanistan for two more years under a new NATO mission called Resolute Support. Turkish defense minister had said then that around 900 Turkish personnel would serve in Afghanistan as part of this mission.

About the threat posed by the ISIL, Khawaja said the group was not visible in Pakistan, but the "ecology of the terrorism is always there."

About China’s capacity to push the Afghan Taliban towards negotiations with Afghan President Ashraf Ghani, he said, "No one can push the Taliban to the table."

"Both Pakistan and China can facilitate the negotiation process, but the reconciliation process is between Afghanistan (government) and the Taliban," he added.

Chinese Foreign Minister Wang Yi had said recently that Beijing was ready to facilitate peace talks between the Afghan government and the Taliban.

Meanwhile, Khawaja also alleged that India wanted Pakistan to get caught up in both of its eastern and western fronts. He went on to claim that India was "directly or indirectly" helping the terrorists.

"But our neighbors should be supporting us and should be helping us. They are directly or indirectly aiding terrorism on our western front. But, terrorism is something which has no borders, they are threatening everybody," he added.

The defense minister also said that the U.S. "should not cast roles" in the region.

"This region should be Afghanistan's, Iran's, Pakistan's and China's responsibility," Khawaja said. "China is a big economic power, its responsibility is important. The U.S. should not just pick which it likes; it should leave the decisions to countries in the region," he added.

While Pakistan's pursues its energy pact with China, the defense minister also said Pakistan would like to see a civilian nuclear deal with the U.S.

The Pakistani minister also mentioned Russia’s offer to provide equipment and training to Pakistani forces. "China is okay with it; we gave the green light to Russia," he added.