"At least nine police officers were killed and 19 civilians were injured when a suicide car bomber targeted an army bus early Wednesday morning in the capital Kabul,” the Ministry of Defense spokesman Zahir Azimi said. 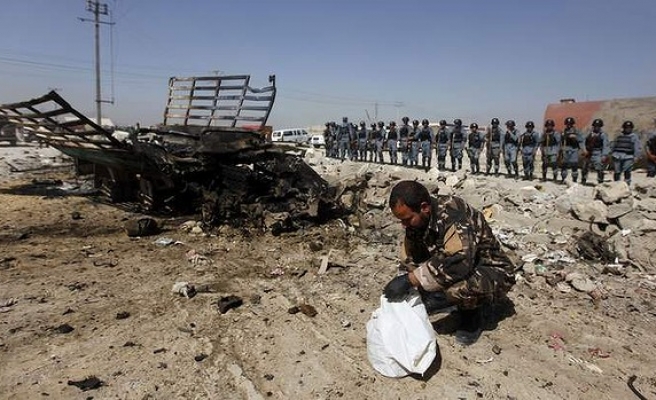 At least nine police officers were killed and tens of civilians were injured when two back to back explosions rocked the capital Kabul early Wednesday morning targeting army buses a day after the new Afghan government signed a controversial bilateral security agreement with the United States.

He added that in another suicide attack on an army vehicle in the eastern part of Kabul, at least three were injured but did not confirm whether they were civilian casualties.

“I was going to get bread from a bakery and heard a big bang when the suicide attacker targeted an army bus. Definitely there were casualties because it was big explosions,” Ahmad Shoja an eyewitness told the Anadolu Agency.

In a separate incident, a suicide bomber targeted an army vehicle in the eastern part of Kabul city which left three injured. The explosions came after the Afghan government signed a long term bilateral security agreement with the United Stated and NATO on Tuesday which was slammed by Taliban militants.

Taliban militants strongly oppose the signing of the security deal between Afghanistan and United States and warned of an intensification of the conflict against the Afghan government. Taliban purported spokesman Zabihullah Mujahid took responsibility for the suicide attacks and said that at least 20 Afghan forces were killed.

“We already warned about signing the deal with the Americans, and this is the first reaction. Americans, with signing this deal, have dug a grave for their 10,000 soldiers in Afghanistan,” Mujahid told the Anadolu Agency.

In a similar suicide attack on Afghan air forces` bus on 2 July, at least eight military personnel were killed and 13 others were wounded.