Two killed in attack on Turkish convoy in Kabul

Taliban have claimed responsibility for the attack but said the intended target was a US military convoy. 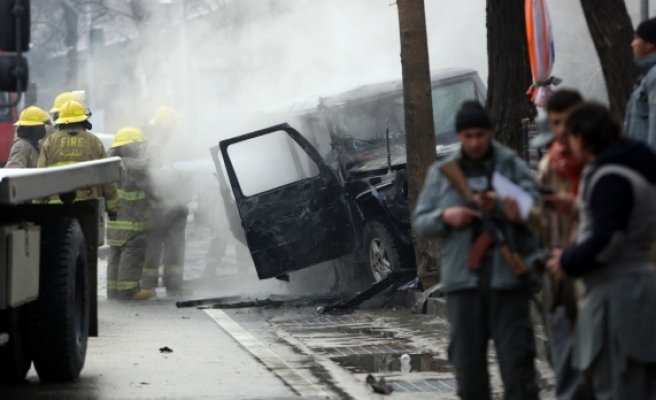 World Bulletin / News Desk
Two people, including a Turkish soldier, were killed and another was wounded in a bomb attack in the Afghan capital Kabul, Turkish General Staff said early Thursday.

The explosion struck in the heart of the heavily fortified capital Kabul, close to the German, Iranian and Turkish embassies, rattling windows and putting embassy staff on high alert.

The NATO Senior Civilian Representative and former Turkish ambassador to Afghanistan could not immediately be reached by phone. Details on his location at the time of the attack were unclear.

"A car bomb attack has been carried out on the vehicle of the security team of Turkish envoy Ismail Aramaz," the Turkish military said in a statement.

The Taliban swiftly claimed responsibility but appeared to have mistaken the Turkish security team for a U.S. convoy, clarifying on Twitter that they had not intended to kill any other country's citizens.

"The purpose of today's attack in Kabul was a convoy of U.S. troops. The embassy or any other country nationals were not objective," Taliban spokesman Zabihullah Mujahid tweeted.

The Senior Civilian Representative's vehicles are factory-made, armoured Mercedes SUVs. The Afghan interior ministry said the one targeted belonged to the Turkish embassy and the driver had been killed in the explosion.

A security report circulated among international security sources in Kabul showed the car had caught fire after the blast, and was burning on its side at the edge of the road just outside the so-called Green Zone.

It was the second time a diplomatic vehicle has been targeted by insurgents in the capital in recent months, after aBritish embassy car was attacked by a suicide bomber in November.

Afghanistan has taken over full responsibility for efforts to end the Taliban insurgency with the withdrawal of most foreign troops at the end of last year.