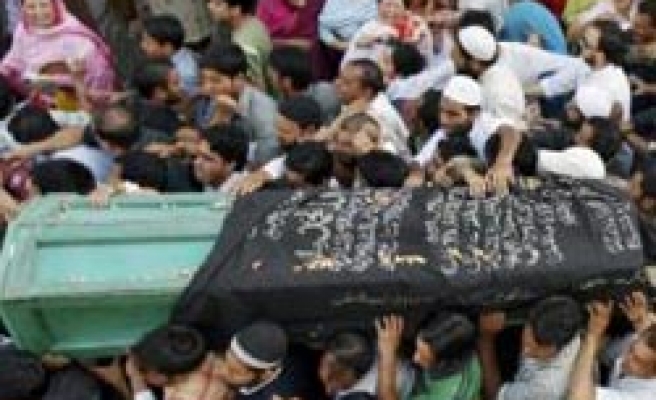 Indian troops shot dead on Friday two more people in Kashmir in firing on demonstrators who condemned army killings and India after the calls for new protests outside Indian army garrisons next week.

One of Kashmir's most influential leaders, Syed Ali Shah Geelani, has called for peaceful sit-in protests on Tuesday outside army camps across Kashmir, defying threats of Indian troops to "shoot on sight" in a three-month long uprising in one of the world's most militarised regions.

Indian troops killed more than 90 Kashmiri civlians in a summer of protests that Kashmiris says peaceful, fuelling anti-India anger in the Muslim-majority valley.

Kashmiris see India as an "occupier" and has called for independence since decades.

"The sit-in protests have never been peaceful ... I would appeal to the Hurriyat (the separatist grouping) to call off its call," army spokesman Lieutenant Colonel J. S. Brar told reporters late on Thursday.

The death toll so far includes children, women and teenagers, nearly all killed by police bullets.

Prime Minister Manmohan Singh, faced with criticism of not dealing with the protests seriously, held a meeting with the government and opposition parties on Wednesday, but all it decided was only to send a delegation of politicians to Kashmir.

Geelani, a leader of the umbrella grouping All Parties Hurriyat Conference, has demanded India declare Kashmir an international dispute, withdraw hundreds of thousands of troops from the region and release all political prisoners as a precondition for talks.

"It seems both Srinagar and New Delhi are clueless, there is no end to the violence. Indians should act sincerely before it is too late," Mohammad Shafi, a former Kashmiri lawmaker, said.

The continuing police shootings, imposed curfews and the cycle of strikes and as a response has shut down schools, colleges and offices, stopped newspapers from being printed, and made food and medicine scarce.