Typhoon Lan, described as "very large and very strong" by Japan's meteorological agency, was packing gusts up to 216 kilometres (134 miles) per hour Sunday night in the Pacific south of Japan. 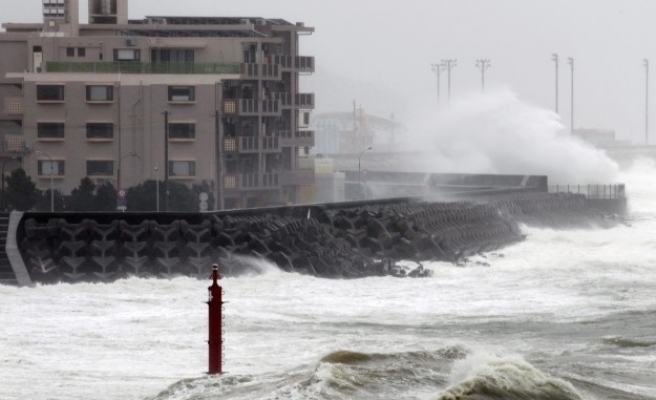 A powerful typhoon barrelled towards Japan on Sunday, prompting Prime Minister Shinzo Abe to put his government on alert as millions struggled to the polls for a national election.

The storm, which has already lashed large areas of the Japanese archipelago, was moving northeast and may hit Tokyo or surrounding regions Monday morning.

Television footage showed rescuers tugging a rubber boat carrying an elderly woman in a residential area in Chiba southeast of Tokyo as a flooded river engulfed the area.

At least eight people were injured across the nation, public broadcaster NHK said. They included an elderly man who was knocked out when scaffolding collapsed on him at a construction site in Fukuoka, western Japan.

Toyota Motor said it would suspend operations at all domestic plants on Monday.

Abe ordered his minister in charge of disasters to be ready to mobilise rescue and evacuation forces, including troops.

"In order to protect people's lives, the Abe cabinet will unite and do its best to provide an emergency response to a disaster," he told reporters.

Several local governments in Osaka and other prefectures issued evacuation advisories, urging thousands of residents living near the coast, rivers and hillsides to move to shelters.

The weather agency separately warned of high waves, landslides and floods in central and western Japan.

Voters in the capital braved torrential rain and driving wind on election day, as opinion polls indicate Abe is on course for a comfortable win.

Analysts say that if the weather affects turnout, it is likely to benefit Abe, whose conservative voters are seen as more determined to cast their ballots.

Voting was delayed by some 20 minutes in Kochi in western Japan when landslides blocked a road, while several polling stations closed earlier than scheduled.

Ferries to a remote island in the west were cancelled due to high waves, forcing election officials to suspend the counting of votes there.

On Saturday voters on remote southern islands in the path of the storm had cast their ballots early, heeding a call from Abe.