China's National Meteorological Center said the storm, with maximum winds of 138 kilometers per hour (85 miles per hour), could brush past parts of Shandong province early on Monday. 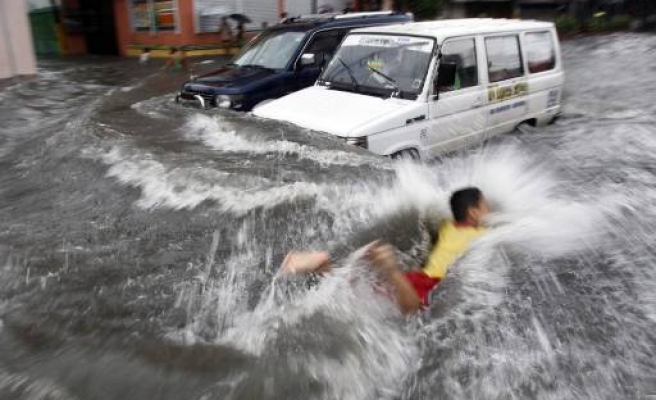 Typhoon Muifa weakened as it approached China's coast on Sunday, avoiding a direct-hit on the financial capital Shanghai and veering north towards a tip of Shandong province that juts into the Yellow Sea.

The storm was expected to skirt China's eastern seaboard while delivering strong winds and torrential rains. But forecasters said it could spare residents serious damage from what had been feared to be the area's worst typhoon in years.

Muifa, however, proved more disruptive than damaging. Authorities had evacuated more than 310,000 residents from Shanghai, cancelled more than 200 flights and closed two bridges to outlying islands, the news agency reported.

"It does not feel like a typhoon at all," Li Hongjun, 29, a visitor from Shaanxi province, told Reuters. "These winds are quite normal. I would think a typhoon would feel much stronger and there should be no one walking in the streets."

China's National Meteorological Center said the storm, with maximum winds of 138 kilometers per hour (85 miles per hour), could brush past parts of Shandong province early on Monday.

Tropical Storm Risk (http://www.tropicalstormrisk.com/) predicted that Muifa would likely slow to a tropical storm as it headed north, making landfall near the port city of Dalian.

"They did tell us that if the typhoon was strong, we would have to shut our shops and take a break for a few days. But we are open because the alert is over," he said.