Television showed waves crashing over breakwaters on the Pacific coast and trees knocked down on streets of Tokyo. 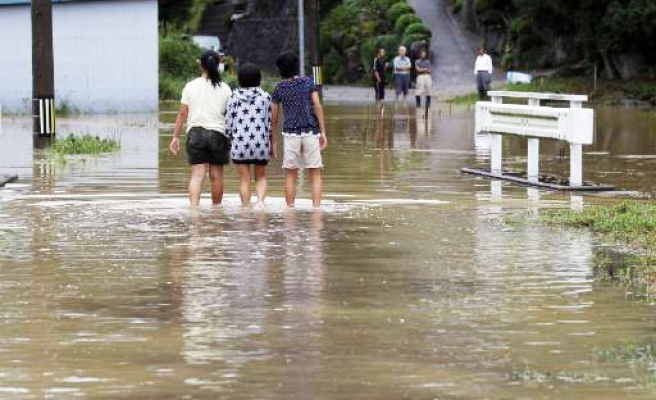 A powerful typhoon struck Japan on Wednesday, pummeling the Tokyo area with heavy rain, disrupting public transportation and leaving four people dead, and it was headed towards the tsunami-crippled Fukushima nuclear plant.

Typhoon Roke, the second big storm to hit Japan this month, was packing winds of up to 220 km per hour (130 miles per hour) and dumped more than 40 cm (16 inches) of rain in parts of eastern and western Japan over the past 24 hours, the Japan Meteorological Agency said.

Roke made landfall near Hamamatsu, 200 km (125 miles) west of Tokyo, around 2 p.m. local time (0500 GMT), and cut a path through eastern Japan before moving north of the capital in the evening.

Television showed waves crashing over breakwaters on the Pacific coast and trees knocked down on streets of Tokyo.

Tokyo Electric, the operator of the Fukushima Daiichi nuclear power plant 240 km northeast of Tokyo that was crippled by a massive earthquake and tsunami in March, said the typhoon has so far caused no damage to the plant.

"The biggest element of concern is the rise of (radioactive) water levels in turbine buildings," Junichi Matsumoto, a Tokyo Electric official, told a news conference.

The site still has huge amounts of water that was used to cool reactors where fuel meltdowns took place after cooling systems were knocked out by the March disaster, raising concerns that heavy rain could cause overflows of radioactive water into the sea and groundwater.

"We expect to be able to withstand (an overflow) even if water levels rise suddenly," Matsumoto said.

Roke halted commuter trains in and around Tokyo, stranding thousands of passengers as they tried to go home early before the storm hit the capital.

Public broadcaster NHK said about 450 flights had been cancelled, while Central Japan Railway said it had suspended some bullet train service.

Earlier this month, Typhoon Talas hit western Japan and left about 100 people dead or missing. An average of two to four typhoons make landfall each year in Japan.