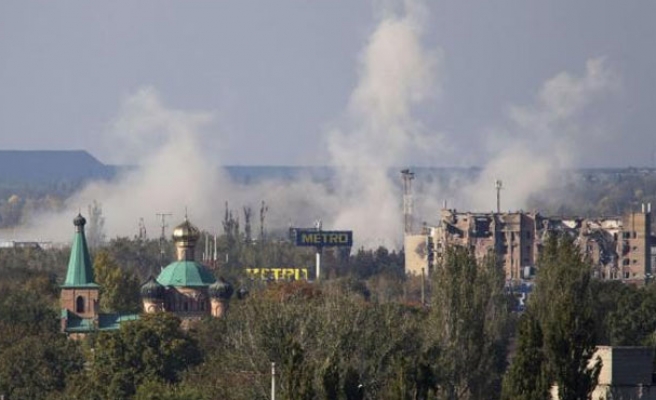 Ukrainian separatists said on Tuesday they had pushed government troops out of two districts on the outskirts of their main stronghold Donetsk and their aim was to expand their control to the entire region.

A rebel advance launched last week has dashed a five-month truce, reignited a war that has killed 5,000 people and brought threats of new sanctions on Moscow, which NATO accuses of backing the separatists with money, arms and troops.

The separatists say their initial aim is to drive back government forces to push artillery out of range of their cities and improve their grip on their main strongholds.

Eduard Basurin, deputy commander of rebels in their main stronghold Donetsk, said fighters had pushed government troops out of the suburb of Maryinka and the centre of the town of Pesky near Donetsk's airport, a constant battlefield.

"They had fully controlled Maryinka before. Now it is neutral. They are only on the outskirts," he said by telephone.

The goal would eventually be to capture the entire Donetsk region, Basurin said. That would include major population centres in government hands, like the Black Sea port of Mariupol, a city of 500,000 where Kiev says rebel shelling killed 30 people on Saturday. Basurin said there was nevertheless no offensive on Mariupol under way at present.

Asked if rebels were advancing on Debaltseve and Vuhlehirsk, two other government garrisons where Kiev has reported fighting, he said: "Why should we have to advance? It is our land. They should withdraw."

Both sides say the rebels are fighting to encircle Debaltseve, a small town between the two main rebel strongholds of Donetsk and Luhansk which straddles key road and rail routes linking them.

"The enemy is trying to carry out an offensive on Ukrainian units and occupy strategically advantageous positions for further military operations," government military spokesman Andriy Lysenko said in a televised briefing. Nine Ukrainian servicemen were killed and 30 wounded in the past day, he said.

He said Debaltseve, Vuhlehirsk and Mariupol were bearing the brunt of the offensive.

Shelling has continued all along the frontline, which weaves through Donetsk and neighbouring Luhansk provinces.

"They've been shooting heavily for ten days. You sit there and have no idea who is in control of the town, who is shooting and when it will end," said 60-year-old pensioner Vladimir Saakyan, who fled his home in the town of Avdiivka, north of Donetsk, for Kiev-held territory.

The head of the Kiev-run regional police said three civilians had been killed in Avdiivka and nearby overnight.

The new rebel advance has brought calls from the United States and Europe for tighter sanctions against Moscow, which Kiev and NATO say has sent thousands of troops to fight on behalf of the rebels. President Barack Obama has said Washington would consider all steps short of military action to isolate Russia.

European Union leaders asked their foreign ministers to consider possible new sanctions on Russia in response to the rebel offensive. A final decision to impose them is likely to be left to a summit next month.

The separatists, fighting for the independence of an area dubbed "New Russia" by the Kremlin, now control the capitals and around half of the territory of Donetsk and Luhansk provinces, together known as the Donbass region.

Mariupol is by far the biggest city in the Donbass still held by the government, and capturing the Azov Sea port from Kiev would give the rebels important strategic advantages. But any such battle could involve urban warfare on a scale unprecedented in the conflict.

The rebels halted at the gates of Mariupol during their last big advance before the ceasefire was signed in August.

Ukraine's parliament on Tuesday approved a statement defining Russia as an "aggressor state".