UN appealed for $459 million in aid just one day before of holy month Ramadan which Pakistani victims are preparing to observe despite misery. 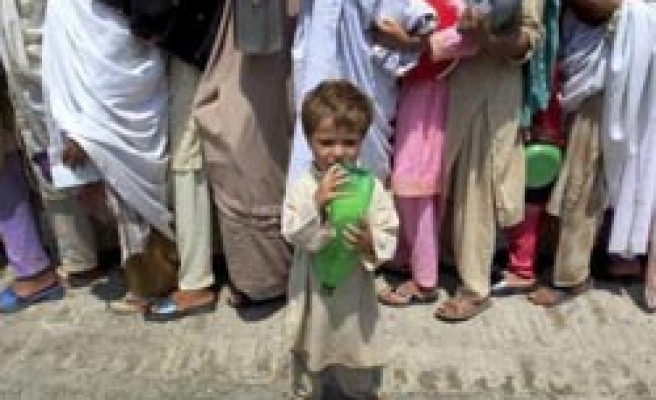 The United Nations appealed for $459 million in emergency aid for Pakistan after floods devastated large areas of the country just one day before of holy month Ramadan which Pakistani victims are preparing to observe despite lack of food .

The appeal was launched by U.N. humanitarian chief John Holmes at a meeting at U.N. headquarters and will cover a 90-day period of immediate relief.

According to U.N. figures, more than 14 million people have been affected by the floods, more than 1,200 have died and nearly 300,000 homes have been damaged or destroyed.

Holmes told U.N. envoys the disaster was "one of the most challenging that any country has faced in recent years."

Holmes said the "emergency response plan" would be revised after 30 days as more information came in.

They've been left homeless and hungry by the worst flooding in decades, but for many Pakistanis, their suffering is no reason to ignore the Muslim fasting month of Ramadan.

Muslims abstain from food and drink from dawn to dusk during Ramadan, which is due to begin on Thursday in Pakistan and which started on Wednesday in many other Muslim countries.

any survivors from flooded villages have lost their stores of food as well as crops in the field and livestock, and are surviving on occasional handouts, living in the open.

But despite the hunger and hardship, for most people not observing the fast during the most sacred of months is unthinkable.

"We will fast but we don't know how will be break the fast, whether we will find any food or not. Only Allah knows," said Nusrat Shah, sitting beside a bridge in Sukkur, where she had laid out bedding for her family under the sky.

"Pray for us," said Shah, as she made tea over a smoky fire.

Fasting Ramadan is a requirement for all able-bodied Muslims, but Islam exempts, among others, those who are travelling, ill or not strong enough to abstain from food and drink.

Countless villages have been swallowed up in the floods and many people are still stranded, some on tiny, shrinking patches of water-logged land.

People traditionally break fast with a meal of fried food and sweets at dusk. The vast majority of Pakistan's 165 million people are Muslim.

"What kind of a question is that?" laughed Fakhar Zaman, a businessman in the Swat valley, northwest of Islamabad, which has been cut off this week by floods and landslides, when asked if he would be fasting this year.

"You know the people of Swat, they would never skip fasting," he said.

A big international relief effort is gearing up to help the flood victims, and some aid workers fear that Ramadan could endanger the health of people already facing food shortages, and complicate efforts to deliver assistance. People only getting poor nutrition are not well placed to fast although abstaining from drinking water for much of the day could protect people from water-born diseases, said a doctor involved in the relief effort.

"Definitely, they are not in a good position to fast. The food they are taking is not enough," said the doctor, Ahmad Shadoul.

"On the other hand, fasting can be a preventive measure for diarrhoea as people are not drinking water for 14 to 15 hours."

Working hours in many Muslim countries are shortened during the month when people fasting often suffer from a lack of energy.

While aid agencies aim to continue working flat out, there are worries that the effort may flag.

"Of course, it will be a very challenging situation."

Naseer Somroo, who had just been evacuated on a navy boat from his flooded village in Sindh province, said he and his family were getting sick and had been hungry for days but his faith was unshakeable.

"We've already been fasting for four days ... We'll observe Ramadan but we don't know how our Eid will be," he said referring to Eid al-Fitr festival at the end of the month which is usually the most joyous holiday of the year.