Zardari returned home on Tuesday from official foreign visits to a chorus of criticism over his government's response to the country's worst flooding in 80 years. 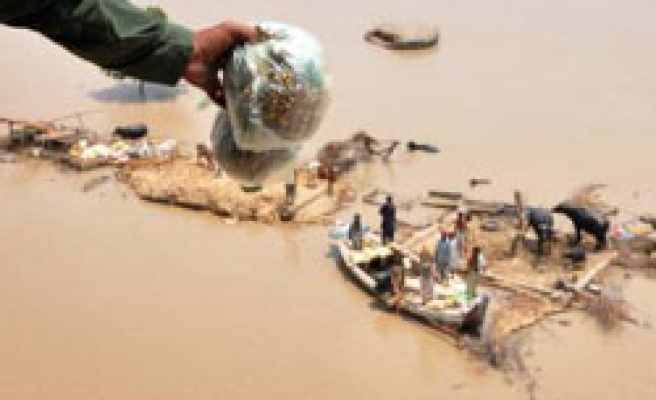 The United Nations is launching an appeal to help 13.8 million people hit by one of the world's worst humanitarian disasters after floods paralysed parts of Pakistan and fanned fears of disease.

About 1.5 million people have been evacuated in the south and 1.5 million hectares of valuable farmland destroyed in central Punjab province while the worst hit has been the northwest, already struggling with US-backed offensives against local fighters who support Taliban forces fighting against foreign troops invading nearby Afghanistan.

But, the United Nations said Monday, the number of people suffering from the massive floods in Pakistan exceeds 13 million - more than the combined total of the 2004 Indian Ocean tsunami, the 2005 Kashmir earthquake and the 2010 Haiti earthquake,

The death toll in each of those three disasters was much higher than the 1,500 people killed so far in the floods that first hit Pakistan two weeks ago. But the U.N. estimates that 13.8 million people have been affected - over 2 million more than the other disasters combined.

Pakistani Prime Minister Yousuf Raza Gilani said Monday that the floods were a bigger crisis than the 2005 Kashmir earthquake that killed nearly 80,000 people and the army's operation against the Taliban in the Swat Valley last spring that drove more than 2 million people from their homes.

"The magnitude of the tragedy is so immense that it is hard to assess," said Gilani during a visit to the central Pakistani city of Multan.

U.N. Secretary-General Ban Ki-moon told reporters in New York that he was extremely concerned about the situation.

"We will soon issue an emergency response plan and an appeal for several hundred million dollars to respond to immediate needs," he said, stressing that medium- and long-term assistance "will be a major and protracted task."

Pakistani President Asif Ali Zardari returned home on Tuesday from official foreign visits to a chorus of criticism over his government's response to the country's worst flooding in 80 years.

Zardari, the widower of assassinated former prime minister Benazir Bhutto and whose rule has been mired in controversy, enraged his critics by going ahead with state visits to Britain and France as the catastrophe was unfolding.

The military has taken the lead in relief efforts while the government is under fire for perceived neglect.

"The president has returned and he is in Karachi. He will come to Islamabad today," Zardari's spokesman Farhatullah Babar told Reuters.

A government official said he was expected to visit the flood-hit areas within days, but for many Pakistanis, his trip is too little, too late.

"All that I can say about Zardari is that our houses are collapsing and his government is not even bothered," said Daraz Gul, a salesman in a hardware market in the town of Nowshera in northwest Pakistan.

"A government is supposed to be like a parent. If a parent leaves his children in trouble and goes on jaunts abroad, it is scandalous."

Dozens of protesters in the southern town of Sukkur in Sindh also accused politicians of ignoring flood victims. "They want to save their own lands and factories. They don't care if Sukkur is drowned," said cloth merchant Salahuddin Ahmed.

Zardari has been a ceremonial president since parliament adopted constitutional changes stripping him of his powers this year, and the government, led by his political party, said it was was dealing with the floods and the issue should not be politicised.