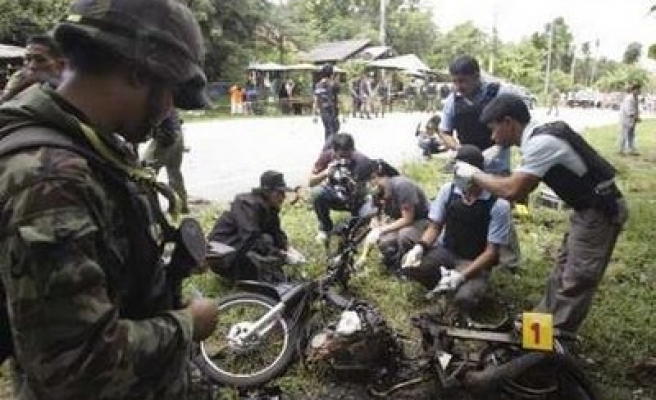 Police discovered three unexploded bombs in Bangkok and a neighbouring province, authorities said on Thursday, the latest in a series of mysterious incidents stoking fears of civil unrest in Thailand.

The devices were all found on Wednesday, one near a school in Bangkok and two others outside a shopping mall and the Public Health Ministry in Nonthaburi, a province on the outskirts of the capital where a controversial emergency decree is in force.

"The bombs were all home-made and we think they were planted by the same group," said national police spokesman, Major-General Prawut Thawornsiri, without saying who he thought the perpetrators could be.

The discovery came after a series of small grenade or bomb attacks across Bangkok that followed violent clashes between troops red shirt protesters in April and May, in which 91 people were killed and up to 2,000 wounded.

No group has so far claimed to be behind the attacks.

Pressure is mounting on the authorities to rescind the emergency decree, which rights groups say is unconstitutional and being used by the government to crush political opposition and silence critical voices.

Deputy Prime Minister Suthep Thaugsuban, however, said the unexploded bombs represented a "clear threat" to security and there would be no lifting of the decree.

"It's difficult to take care of all areas so I insist the emergency decree must remain in Bangkok and six provinces."