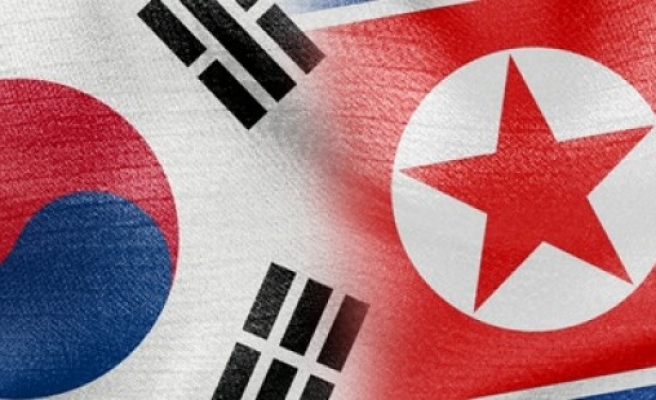 "The two sides held in-depth consultations on how to resolve the situation that was recently created, and how to improve inter-Korean relations," Min said.

He added that both countries would  review each other's positions before resuming discussion at 3 p.m.

The two countries agreed to the urgent talks Saturday after North Korea had said it would take further military action if loudspeakers placed on the South Korean side of the border - which have been broadcasting anti-Pyongyang propaganda - were not switched off by 5 p.m. Saturday

The ultimatum was issued amid an exchange of fire Thursday afternoon.

Signs of war Saturday were ominous, with fighter jets in the sky and artillery units lining the tense North-South divide.

No further details of the meeting were available.

South Korea and its ally the United States earlier dispatched four F-15 and four F-15K jets to simulate attacks on enemy targets, according to the South’s Joint Chiefs of Staff (JCS).

The North denies starting Thursday’s exchange, and has also maintained innocence regarding landmine explosions in the southern portion of the inter-Korean Demilitarized Zone on Aug. 4.

The blasts, which left two South Korean soldiers seriously wounded, prompted Seoul to resume its propaganda broadcasts for the first time in more than a decade.

Outside information is arguably one of the greatest challenges to an authoritarian regime like North Korea’s, which has regularly threatened to respond violently to activists’ leaflet-laden air balloons launched from the South.

Having insisted that it is ready for an “all-out war” earlier Saturday, local reports had suggested that the North was backing up its words with action.

“We see the North Korean military's moves to prepare for the strike,” revealed an unnamed military source according to news agency Yonhap.

"In some areas, towed artillery with a 76.2 mm diameter were deployed to the demilitarized zone, and there are also moves from artillery corps."

Aside from Beijing’s interest in maintaining peaceful ties with both Koreas, United Nations Secretary-General Ban Ki-moon had also expressed his concern.

The former South Korean foreign minister urged “the parties to refrain from taking any further measures that might increase tensions,” via spokesperson Eri Kaneko.

So far the outcome of this week’s exchanges of both threats and shells has been heightened tensions, rather than casualties – though technically this is all part of a much longer conflict as the Koreas never agreed a peace treaty after their 1950-53 war.