The hit on the Afghan hospital in Kunduz deliberate, and was targeted in the belief that a Pakistani operative was coordinate Taliban attacks from within the hospital 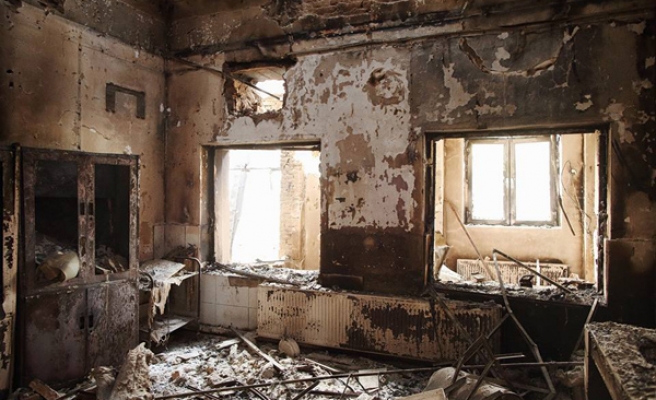 Days before the Oct. 3 U.S. air attack on a hospital in Afghanistan, American special operations analysts had gathered intelligence on the facility — which they were well aware was a protected medical site — because they believed it was being used by a Pakistani operative to coordinate Taliban activity according to The Associated Press.

What is unclear is if  commanders who unleashed the AC-130 gunship on the hospital — killing at least 22 patients and hospital staff — were aware that the site was a hospital or knew about the allegations of possible enemy activity. The Pentagon initially said the attack was to protect U.S. troops engaged in a firefight and have acknowledged that it was a mistake.

The analysts had assembled a special dossier that included maps with the hospital circled, along with indications that intelligence agencies were tracking the location of the Pakistani operative and activity reports based on overhead surveillance, according to a former intelligence official familiar with the material. The intelligence suggested the hospital was being used as a Taliban command and control center and may have housed heavy weapons.

After the attack some U.S. analysts said that the strike had been justified, the former officer says. They also concluded that the Pakistani, who was believed to working for the Pakistani Intelligence had been killed.

No evidence has surfaced publicly to support those conclusions about the Pakistani's connections or the death of the Pakistani. The former intelligence official was not authorized to comment publicly and spoke only on condition of anonymity.

Despite the acknowlegement  top U.S. officer in Afghanistan, Gen. John Campbell, has said the strike was a mistake, but he has not explained exactly how it happened or who granted final approval. He also told Congress he was ordering all personnel in Afghanistan were now going to be retrained on the rules governing the circumstances under which strikes are acceptable.

The new details about the military's suspicions that the hospital was being misused complicate an already murky picture and add to the unanswered questions about one of the worst civilian casualty incidents of the Afghan war. They also raise the possibility of a breakdown in intelligence sharing and communication across the military chain of command.

Doctors without Borders officials who have launched an investigation have said that the U.S. airplane made five separate strafing runs over an hour, directing heavy fire on the main hospital building, which contained the emergency room and intensive care unit. Surrounding buildings were not targeted and remained untouched, they said.

By one U.S. account from the scene, American and Afghan troops were under fire in the area.

Nicolai through an email exchange said that the group's staff "reported a calm night and that there were no armed combatants, nor active fighting in or from the compound prior to the airstrikes."

Doctors without Borders has acknowledged that it treated wounded Taliban fighters at the Kunduz hospital, but it insists no weapons were allowed in. Afghans employed at the hospital also told the AP that no one was firing from within the hospital.

The airstrike came as U.S. advisers were helping Afghan forces take Kunduz back from the Taliban, which had seized the city.

The U.S. military's cursory description of what transpired has changed over time.

Initially, the military portrayed the incident as an accident stemming from the fog of war. American forces in the vicinity were under attack, a U.S. military spokesperson in Afghanistan said in a statement, and called in an air strike "against individuals threatening the force. The strike may have resulted in collateral damage to a nearby medical facility."

Two days later, Campbell told reporters that "Afghan forces advised that they were taking fire from enemy positions and asked for air support from U.S. forces."

He added, "An airstrike was then called to eliminate the Taliban threat and several civilians were accidentally struck."

The following day, however, Campbell told the Senate Armed Services Committee, "To be clear, the decision ... was a U.S. decision made within the U.S. chain of command. A hospital was mistakenly struck. We would never intentionally target a protected medical facility."

Asked about the location of any U.S. troops on the ground, Campbell said, "We had a special operations unit that was in close vicinity that was talking to the aircraft that delivered those fires."

His remark did not make clear whether any American on the ground had a direct view of the hospital. Military officials declined to answer questions, citing the investigation.