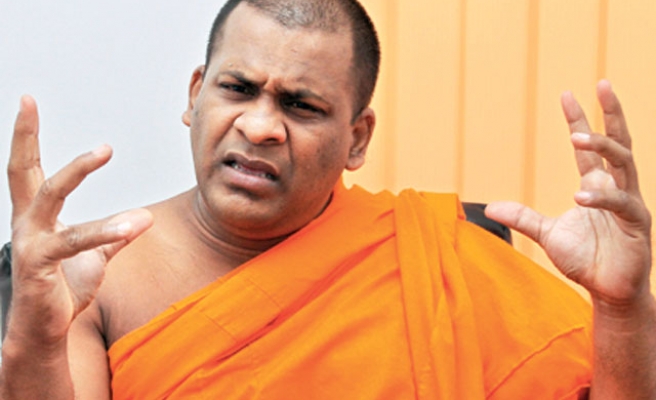 The United States cancelled the visa given to a Sri Lankan Buddhist monk heading a hardline group accused of involvement in violence against Sri Lanka's minority Muslims, an official of the group said on Monday.

Clashes erupted on June 15 in Aluthgama and Beruwela, two towns with large Muslim populations on the island's southern coast, during a protest march led by the hardline group Bodu Bala Sena (BBS), or "Buddhist Power Force".

Galagoda Aththe Gnanasara, a Buddhist monk and the secretary general of the BBS, had been told of the decision, the official said.

"An official from the U.S. Embassy called Gnanasara thero (monk) on Friday and informed him that the State Department wants to convey him that he cannot use his existing visa to enter the United States," BBS spokesman Dilantha Vithanage told Reuters by telephone.

A U.S. Embassy spokesman in Colombo said the U.S. government would not comment on individual visa cases.

The State Department's decision came after BBS on Friday said Facebook accounts of its group's members, including Gnanasara, had been blocked.

Many residents of the towns, thronged by tourists, said BBS activists had made inflammatory statements against Muslims at a rally before the violence. Much of the coast is dominated by Sri Lanka's majority Buddhist Sinhalese community.

The group denies any connection with the incidents, in which three people died and 75 were injured.

Violence against Muslims in Sri Lanka has risen since 2012, mirroring events in Myanmar, which has seen a surge of attacks by members of the majority Buddhist community on Muslims.

President Mahinda Rajapaksa's coalition government has yet to crack down on the BBS despite calls from his own party.

Many independent analysts say well-coordinated violence against Muslims and Christians appears to have tacit state backing as those involved in previous attacks have yet to be punished. The government denies any collusion.

The separatist Liberation Tigers of Tamil Eelam attacked Muslim villages in the northeast during the civil war from 1983 to 2009. More than 140 people were killed in a massacre of Muslims in 1990 blamed on the Tigers, which the group denied.