US, China unveil flurry of accords, play down rivalry

Obama and Jinping unveiled an array of agreements on climate change, military cooperation and trade as they sought to overcome persistent tensions 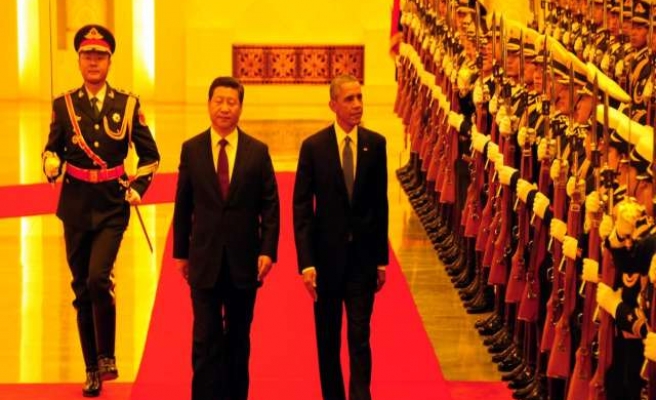 The United States and China announced a largely symbolic plan on Wednesday to implement new limits on carbon emissions, the highlight of a summit between Barack Obama and Xi Jinping in which both leaders played down suggestions of differences and rivalry.

U.S. officials said the commitments by the world's two biggest carbon polluters came after months of backroom negotiations and would set the tone for a global climate control pact, but experts said the limits did not break significant new ground.

The two largest economies in the world have strong commercial ties but have been at odds over everything from China's pursuit of territorial claims in East and Southeast Asia to cyberspying, trade and human rights.

Obama, meeting Xi in Beijing's Great Hall of the People for their first formal talks in more than a year after a dinner the previous night that went two hours longer than scheduled, said he welcomes a China that is peaceful, prosperous and stable.

"In other words, a strong, cooperative relationship with China is at the heart of our pivot to Asia," Obama said, shrugging off criticism that the United States sought to counter China's rise in the region.

"If the United States is going to continue to lead the world in addressing global challenges, then we have to have the second largest economy and the most populous nation on Earth as our partner," Obama said, adding that he was encouraged by Xi's "willingness to engage constructively".

"The Pacific Ocean is broad enough to accommodate the development of both China and the United States and our two countries should work together to contribute to security in Asia," he said.

"The two sides should respect the other's core interests and major concerns, and persist in managing differences in a constructive fashion."

Despite U.S. officials projecting low expectations for any major outcomes in the run-up to the trip, the two sides managed to roll out a series of modest to fairly significant achievements over the course of the visit, on visas, trade, climate and military-to-military ties.

The outcomes of the visit were "more than expected", with Xi keen to use the opportunity to show he wants improved ties despite Obama being on his way out in two years, said Sun Zhe, head of the Center for U.S.-China Relations at Beijing's elite Tsinghua University.

"The bilateral relationship is mature enough that we understand even if we don't have political trust for another five to 10 years, we need to live and work together. That's a new way of thinking by Chinese leaders," Sun said.

In another centerpiece of the visit, the White House announced on Tuesday that the two countries made a breakthrough on eliminating duties on information technology products, a move cheered by U.S. software and technology trade groups that could pave the way for a major deal at the World Trade Organization.

Xi downplayed controversy over competing visions for free trade in the Asia-Pacific which had been an undercurrent at the Asia Pacific Economic Cooperation (APEC) forum earlier in the week.

Washington is working on a 12-country Trans-Pacific Partnership (TPP) deal which excludes China and is widely seen as the economic backbone of Obama's pivot.

But Beijing had used APEC to push forward a study on the Free Trade Area of the Asia-Pacific (FTAAP), a framework which some had seen as a counter to the TPP.

"I don't see any of the regional free trade agreements as targeting China. China is committed to open regionalism and we believe the various regional cooperation initiatives should positively interact with each other. That is currently the case," Xi said.

Despite the bonhomie displayed by both leaders during their public interactions, especially at the APEC summit, sticking points in relations were also on display, from protests in Hong Kong to media freedom.

At their last major talks in California in the summer of 2013, the two countries agreed to few tangibles aside from a pledge to work together to try to resolve disputes over cyber security, an area where relations subsequently worsened.

In May, the United States charged five Chinese military officers with hacking into American companies to steal trade secrets. China showed its anger over the allegations by shutting down a bilateral working group on cyber security.

Washington had flagged the cyber issue ahead of the meeting as a key area of concern, but Obama made no mention of it in his public comments. The South China Sea territorial dispute between China and Southeast Asian nations was also only briefly referred to by Obama.

Still, Obama and Xi sparred over Hong Kong, which has been rocked by sometimes violent pro-democracy protests in recent weeks.

Obama told Xi that the United States would encourage elections in the Chinese territory that are free and fair and reflect the will of people, drawing a riposte from Xi that what happens in Hong Kong is an internal matter for China.