US considering nuclear deal with Pakistan 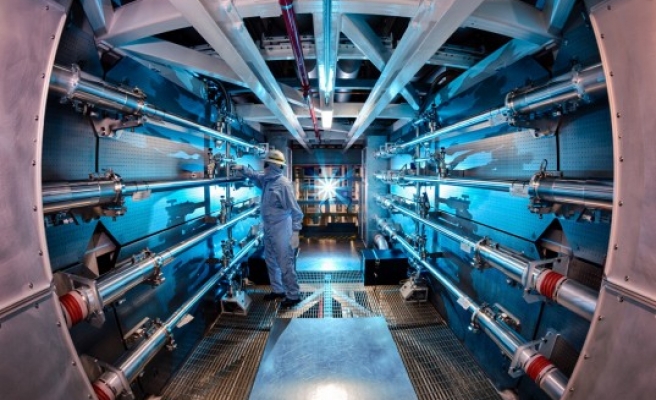 The United States is exploring an option that could pave the way for a civil nuclear deal with Pakistan like the one concluded with India in 2005, according to a report published in The Washington Post on Wednesday.

“The issue is being discussed quietly in the run-up to Prime Minister Nawaz Sharif’s visit to Washington on Oct 22,” said leading columnist David Ignatius in an article he wrote for the Post.

“We are in regular contact with the government of Pakistan on a range of issues as we prepare for the prime minister’s visit,” a US government spokesperson told Dawn when asked for comments on the report. “We’ll decline comment on the specifics of these discussions,” she added.

The spokesperson also said that the United States “urges all nuclear-capable states, including Pakistan, to exercise restraint” regarding nuclear weapons and missile capabilities.

“We encourage efforts to strengthen safety and security measures and continue to hold regular discussions with Pakistan on a range of global issues, including nuclear security, counter-terrorism, and international norms,” she said.

Pakistan’s Ambassador in Washington, Jalil Abbas Jilani, emphasised the “defensive” nature of his country’s nuclear programme when asked for comments on the Post report.

“Pakistan’s nuclear programme is determined by our legitimate security concerns and Pakistan would never compromise on its national security,”

"Pakistan’s nuclear programme is for defensive purposes only.”

The Post report also claimed that the proposed deal could place new limits and controls on Pakistan’s nuclear arsenal in return for “a version of the civil nuclear deal”.

The move is part of fresh efforts by the White House to reduce tensions and violence in Afghanistan and Pakistan.

Mr Ignatius said the proposed nuclear accord with Pakistan was a “diplomatic blockbuster” that would place “possible new limits and controls on Pakistan’s nuclear weapons and delivery systems.”

It “might eventually open a path towards a Pakistani version of the civil nuclear deal that was launched with India in 2005”, he wrote.

A source familiar with the talks told Mr Ignatius that Pakistan “had been asked to consider what are described as ‘brackets’. Pakistan would agree to restrict its nuclear programme to weapons and delivery systems that are appropriate to its actual defence needs against India’s nuclear threat”, the article said.

“Pakistan might agree not to deploy missiles capable of reaching beyond a certain range, for example,” it said.

In return, the US “might support an eventual waiver for Pakistan by the 48-nation Nuclear Suppliers Group”.

It was the United States that persuaded the NSG to exempt India from the rules that banned nuclear trade with countries that had not signed the Non-Proliferation Treaty.

According to the Post article: “Pakistan prizes its nuclear programme, so negotiations would be slow and difficult, and it’s not clear that Islamabad would be willing to accept the limitations that would be required.”

Any progress would break a stalemate that has existed since the US detected Pakistan’s nuclear programme in the mid-1980s, and especially after Pakistan exploded its first weapon in 1998.

Pakistan has repeatedly sought a civil nuclear deal on the lines of the one given to India, describing the current US policy as discriminatory.

The United States had argued no deal was possible because the former head of its atomic programme, Dr. A. Q, Khan sold nuclear technology to Iran, Libya and North Korea.

Mr Ignatius also wrote that the pace of negotiations aimed at tackling the violence in Afghanistan has quickened “thanks to an unlikely US diplomatic partnership with China”.

“A senior administration official said on Monday that ‘we’re hopeful that there will be a willingness on the part of the Taliban to resume negotiations,’ despite the intense fighting in Kunduz and elsewhere. Beijing’s involvement is a ‘new dynamic’ and shows an instance where ‘US interests overlap with those of China’,” Mr Ignatius wrote.

The article claimed that since 2011, US State Department officials had been conducting secret peace talks with the Taliban as they had recognised that the best way out of the Afghanistan conflict would be a diplomatic settlement with “the Taliban and its sometime sponsors in Pakistan,” the article said.