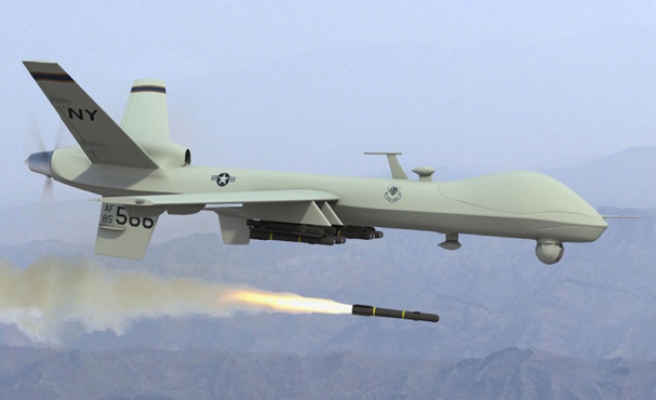 A U.S. drone strike killed six suspected militants in northwestern Pakistan, security officials said on Friday, as al Qaeda said two members of the group had been killed in a previous strike.

Two missiles struck a house in Mada Khel village of the North Waziristan tribal region near the Afghan border on Thursday night, said a security official based in the area.

Local and foreign militants were among the casualties, he added. Another government official based in nearby Datta Khel town confirmed the death toll.

He said civilian residents of Mada Khel had fled their homes before an anti-Taliban military offensive began in North Waziristan on June 15. His information could not be immediately confirmed because there is no cell phone reception in the village.

The military says it has killed around 1,200 militants since beginning the operation in North Waziristan. Most of the civilian population - around a million people - were ordered to leave their homes before the offensive began. Access to the area is tightly controlled.

Sarbaland's two young sons were also killed, Mahmoud said, according to a translation of the message provided by the SITE Intelligence Group.

Both men were Pakistani nationals who belonged to AQIS, a new franchise of the militant group announced in September.

Three Taliban fighters told Reuters that Sarbaland used to treat wounded Taliban militants. He was in a house near the Afghan border when it was hit by a drone on Nov. 11, they said.

The men inside tried to flee, along with Sarbaland's two sons, aged 12 and 13, but a second missile hit the truck they were travelling in, the militants said.

Thursday night's strike was the 21st drone strike so far this year, according to the Bureau of Investigative Journalism, which tracks the strikes using media reports.