Visit takes place amid US, China tensions for buildup in disputed waters 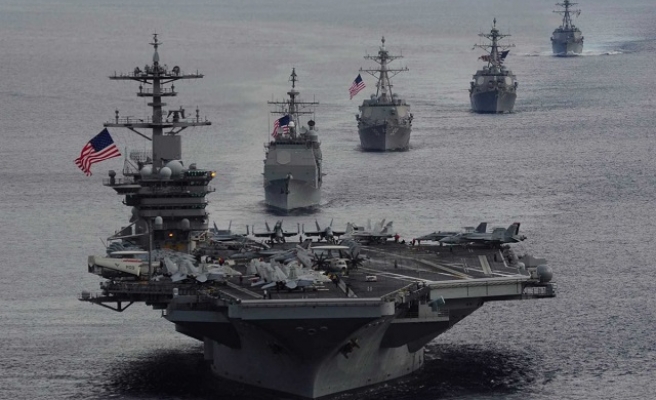 The U.S. and Malaysian defense chiefs will visit the USS Theodore Roosevelt aircraft carrier as it passes through the South China Sea on Thursday.

The visit by Ash Carter and Hishammuddin Hussein takes place amid U.S. and Chinese tensions about the Asian giant’s buildup in the region

"The Teddy Roosevelt's presence there and our visit is a signal of our commitment to our rebalance and the importance of the Asia Pacific to the United States," Carter said during a press conference at the end of a regional summit in Malaysia.

But a Pentagon spokesman said the visit might not be directly related to recent contentious exchanges between the U.S. and China about the South China Sea and, that with 50 U.S. naval assets currently in the region, it is normal for a defense chief to pay a visit to a ship.

China began a massive reclamation project on about half a dozen land features in the area last year, adding about 3,000 acres (1,200 hectares) of artificial land and turning what were mere rocks barely above water at low tide into artificial islands large enough to host runways capable of accommodating high-performance jet aircraft and naval docking.

The U.S. and Japan have raised concerns about the expansion, which they suspect is aimed at extending China’s military reach, while the Philippines -- which calls the area the West Philippine Sea -- has taken the quarrel to the International Tribunal for the Law of the Sea at The Hague.

In October, the U.S. Navy reportedly conducted "freedom of navigation" operations in the waters after Carter told lawmakers the previous month that the U.S. "will fly, sail and operate wherever the international law allows.”

U.S. officials have stressed that the warships that patrol close to the islands "should not provoke significant reaction from the Chinese".

Last week, China contested the USS Lassen’s patrol of within 12 miles of the Subi Reef in the Spratly Islands located 26 kilometers (16 miles) southwest of the Philippine-occupied Thitu Island.

Chinese Defense Minister Chang Wanquan, earlier this week said his country would defend its sovereignty in the contested area.