Exercises taking place against backdrop of maritime tensions in South China Sea, with some exercises staged near disputed isles 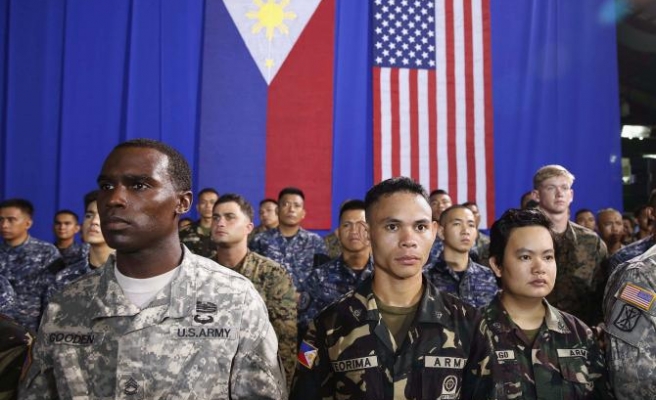 Annual military drills involving the United States and the Philippines kicked off Monday with more than 5,000 U.S. troops taking part.

Australian forces are also participating in this year's war games, to be held until April 15, with some activities taking place near disputed isles off Palawan province in the South China Sea -- which Manila calls the West Philippine Sea.

The joint manoeuvres -- dubbed "Balikatan" (shoulder-to-shoulder) exercises -- are widely seen as a demonstration of Manila's continued military alliance with Washington.

U.S. exercise director Lt. Gen. John Toolan said during opening ceremonies that the alliance between the Philippines and the U.S. is strong and demonstrated by the yearly drills between the two nations.

"The United States is committed to this relationship and these are not empty words. These are in [the] American expression, putting our money where our mouth is," the state-run Philippines News Agency quoted Toolan as saying.

"We have over 5,000 U.S. Marines, sailors, soldiers and airmen here which represent this substantial commitment of the Pacific Command."

Nearly 4,000 Philippine soldiers and 80 from Australia are also taking part.

The U.S. and its allies have expressed alarm at China's maritime expansion, which includes reclamation work such as the building of airfields on some of the disputed islands, while the Philippines has taken the quarrel to an international court in The Hague.

Vietnam and Japan have sent officers to observe the "Balikatan" exercises.

In an editorial Monday, China’s state news agency Xinhua referred to the exercises as "capping Manila's recent attempts to involve outsiders in the regional row".

"However, a provocation so fear-mongering and untimely as such is likely to boomerang on the initiators," it added.

On Monday, the U.S. exercise director underlined that peace in Southeast Asia depends on cooperation.

"And as we think about the Philippines and its security landscape, analyzing its history, patterns and dynamics of how our militaries engage with one another, we can identify one area that's missing and what we can do better to help our two nations achieve their respective aspirations for defense and security."

Aside from ground troops, U.S. fighter jets, five warships and rocket launching pads will see action during the two-week exercises.