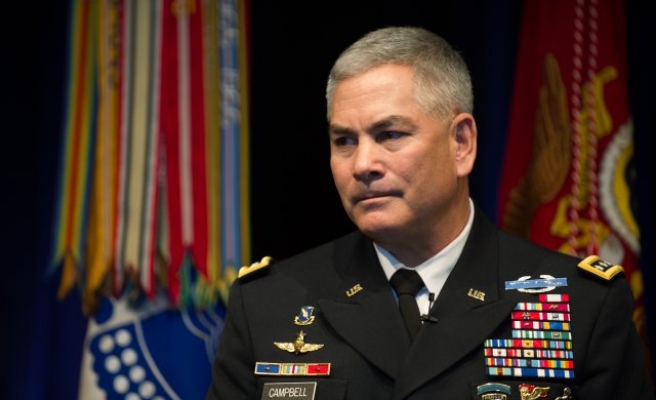 Reducing the number of American troops in Afghanistan will leave a very limited force to train and assist Afghan forces, the U.S. general at the helm of forces in the war-torn country said Thursday.

Army Gen. John Campbell's comments came at a hearing in the Senate where he appeared before lawmakers for the last time before his retirement.

“The 5,500 plan was developed primarily around counterterrorism. There is very limited train, advise and assist in those numbers,” said Campbell.

“Afghanistan is at an inflection point, and I believe if we do not make deliberate, measured adjustments, 2016 is at risk of being no better, and possibly worse, than 2015.”

Campbell said 2015 was “fundamentally different than previous years” of the campaign because Afghan security forces undertook the security of the country and the U.S. and NATO’s mission changed from combat to train.

Respective to the changes on the ground, according to Campbell, “evolving threats” in the country brought about challenges for Afghan forces’ success.

A recent report by the Pentagon also revealed that security is deteriorating in Afghanistan as per the revival of Taliban and the infiltration of Daesh into the war-torn country.

“The enemy has also changed this year," Campbell said. "Unlike previous years, the Taliban extended the fighting season and has continued to conduct operations in Helmand as called for by the Taliban leadership.”

President Barack Obama was planning to reduce the U.S. force in Afghanistan to 1,000 troops, stationed in the capital, Kabul. But last October he decided to keep 9,800 troops throughout 2016 and further reduce the number to 5,500 by early 2017.

Pressed by lawmakers, the four-star general said the decision to reduce troops to 5,500 was based on assessments by military leadership but noted that it might be adjusted based on conditions on the ground.

He said whether adjustments would be made would depend on the progress of Afghan forces throughout the summer. “If the assumptions that we made for the 5,500 plan don't come out true, then of course, we have to make those adjustments,”

Campbell said. "I want to keep 9,800 as long as I can before I drop down to 5,500," he added, noting that the administration should reach a decision about whether to adjust the number by early summer so that NATO can discuss the issue throughout the year.

Campbell also acknowledged that U.S. forces are not authorized to go after the Taliban unless the militant group poses a direct threat to them, but added that the administration recently gave him authority to strike Daesh’s branch in Afghanistan.

The committee approved Nicholson's nomination Thursday by voice vote, sending the nomination to the full Senate.