The video that was uploaded on Youtube shows the woman who insulted passengers after a group of children refused to give up their seats for her on a commuter train. 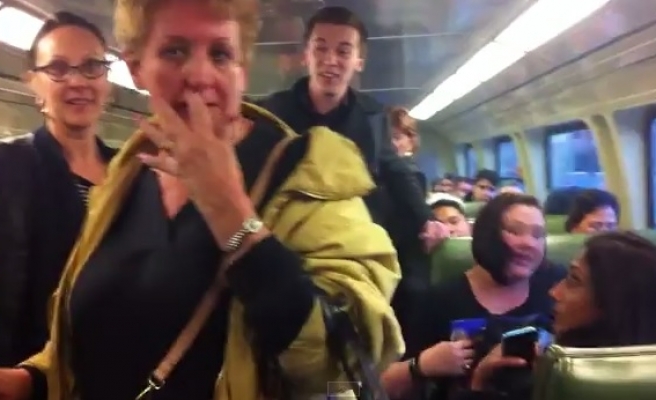 Police are investigating a video that shows a fellow traveler on an Australian Central Coast train between Newcastle and Sydney, being racially abused by a middle-aged woman.

The video that was uploaded on Youtube shows the woman who insulted passengers after a group of children refused to give up their seats for her on a commuter train.

The woman shouted in the kid’s faces, asking them whether their “mother ever taught them any manners?” and calls one the children an “impolite boy.”

The tirade became more volatile as others on the train began to defend the children.

One man tells the woman to “shut up” and the woman reacts by saying, “he’s too lazy to jerk off, he can only get a gook for a girlfriend.”

The she mocks an Asian girl who also couldn’t stay quiet against her rudeness. The abusive woman said “what’s wrong with Hong Kong? Why did you come to this country?”

Believing the woman of Asian descent to be the girlfriend of one of the men that questions her behavior, she begins to shout “bogan” at him and saying it is a “sad” that he "can’t get" a non-Asian girlfriend.

New South Wales Police said they “take incidents such as this very seriously,”

According to broadcaster Ninemsn, they have identified the perpetrator as 55-year-old Sue Wilkins.

In an interview with the broadcaster, Wilkins said, “It was not nice what she said to the lady” and agreed “she shouldn’t be saying that to other people.”

She admitted that her reaction could have been because of the stress she was under trying to find a job.

She did say that despite the stress she was under “it was no excuse” and said, “she was horrified with herself.”