A flood washed thousands of barrels of a dangerous chemical from a factory into the area's main river. 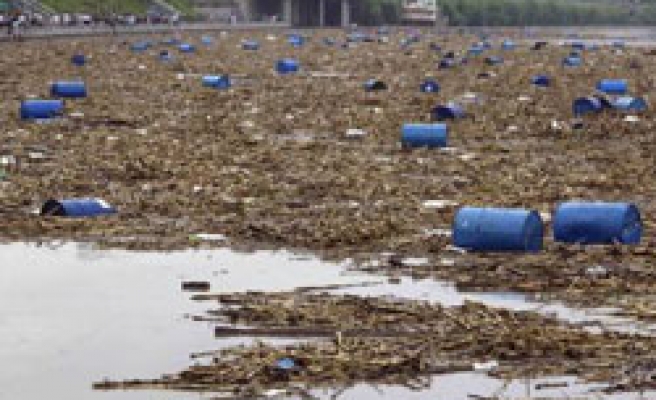 Water supplies were cut for a time to part of the northeastern Chinese city of Jilin, after a flood washed thousands of barrels of a dangerous chemical from a factory into the area's main river, state media said on Thursday.

A "small quantity" of two pollutants produced by the plant were found in the Songhua River, and a reporter smelt a strange odor as he watched dozens of the metal containers float through downtown Jilin, the official Xinhua agency said.

It was not clear how well the barrels were sealed. But the environmental protection ministry said late on Wednesday that tests showed nothing abnormal about the water quality. It would monitor the river closely, it added in a statement.

Jilin city suffered a major chemical spill in November 2005, when an explosion at a petrochemical plant released tonnes of hazardous chemicals into the river.

That was covered up for over a week. In the face of widespread panic, officials were forced to cut water supplies to millions of people, including the city of Harbin.

The latest spill was triggered when flood waters rushed through a chemical plant on Wednesday morning, carrying off barrels, including some of trimethyl chloro silicane, a colorless, flammable liquid with a pungent smell, Xinhua said.

Around 3,000 barrels contained 170 kg (375 lb) of chemicals, and another 4,000 were empty, Xinhua said, citing a government official speaking at a news conference in Jilin. That suggested as much as 500 tonnes could potentially contaminate the river.

Jilin, with a population of 4.5 million, was seized by panic buying of water, with some shops sold out.

By Thursday morning, however, water supplies had been restored to most districts, residents reached by telephone told Reuters, with only one western area still cut off.

Areas downstream could still be at risk, as emergency workers have so far fished only 400 barrels out of the river.

The Songhua River is a major tributary of the Heilongjiang or Amur river, which forms China's border with Russia for several hundred km before crossing fully into the neighbouring nation.