Women and children suffer most by violence in Myanmar

Moreover, the death risk for the Rakhine natives continues due to malnutrition and unsanitary environment even after they flee to Bangladesh. 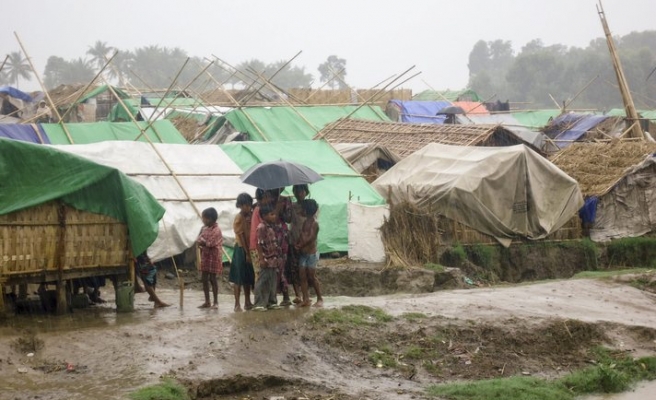 As the most forgotten and persecuted minority who used to live in Rakhine State for centuries, the women and children are the most suffering Rohingyas by the Myanmar military's violent purge.

Some 75 kilometers (46 miles) southeast of Cox's Bazar city, dozens of Rohingya Muslims could be seen walking towards the Bangladesh side in the pitch-black night.

Sura Katu, a 55-year-old sick woman, who was placed and carried on a wooden seat by her two sons over their shoulders, as they tried to reach safer area.

When they arrived from the riverside, which remained as the last obstacle to overcome before the border, the sons started begging the boat owners for assistance, however were repeatedly rejected for not having enough money.

Amid the desperation and the perilous plight, they jumped for joy as they were told that they would be taken to where ever they would want to go by a boat filled with Turkish journalists and volunteers.

"I do not know what to say," Rasul ebulliently said as he was trying to protect his mother from the heavy monsoon rain on a boat. "She is very sick and we have been walking for 10 days."

He said that they had to sleep in the fields, forests and waysides to hide from the Myanmar military and security forces as well as radical Buddhist monks' brutal attacks.
"I have been sick for a long time and whenever it became unbearable for me, I was going to Bangladesh to be treated, because they do not allow us to go hospitals in Myanmar" the mother told Anadolu Agency. "But I could not even go to Bangladesh after they started attacking the villages."

"It was always hard to go to other side but at least we could come back to our own land," Sura added, saying that they left their village permanently this time.
When asked if they knew anyone in Bangladesh who could assist and host them, she simply said "No" with a shaky voice.

Reaching the Bangladesh border after about half an hour of boat voyage, the Katu family had gone out of sight on foot in the dark.