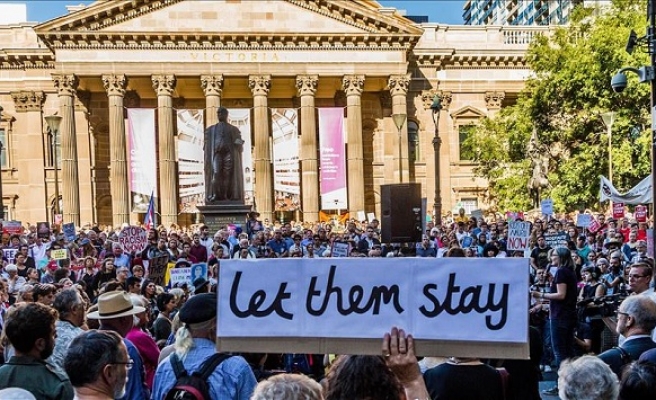 Human rights group Amnesty International Wednesday slammed Australia for its treatment of asylum-seekers in remote Pacific camps, as it also urged Canberra to "lift their game" and help relieve the international refugee crisis.

Australia sends asylum-seekers who try to arrive by boat to camps in Papua New Guinea and Nauru, and blocks them from being resettled in Australia even if they are found to be refugees.

Amnesty said a key concern was the length of time asylum-seekers were being held at the camps as their refugee applications are processed.

"That has a really horrendous effect on their mental health, and we all know what that can lead to. We've seen self-harm, we've seen attempted suicides," Amnesty's Australia head Claire Mallinson said.

Canberra has long defended its policy of denying asylum-seekers resettlement in Australia, saying it has prevented deaths at sea and secured the nation's borders.

But rights groups have criticised conditions in the camps, while the government-funded Human Rights Commission has found children who lived in the Nauru centre had high levels of mental illness.

The Amnesty report comes amid protests across the country over the expected deportation to Nauru of 267 asylum-seekers who had been brought to Australia with their families for medical treatment.

The group includes 37 babies born in Australia and 54 other children, refugee advocates say.

Mallinson also called for an independent review into allegations that Australian authorities paid crew on a people-smuggling boat US$30,000 to return 65 asylum-seekers to Indonesia.

Australian officials in early February refused to confirm or deny the allegations.

At the same time, Mallinson said despite Canberra's pledge to resettle 12,000 Syrian refugees amid the crisis in Europe, only 26 had arrived in Australia.

"They've only actually resettled 26 so far. Over the same time period, Canada has resettled 25,000," Mallinson said.

"There are far more refugees globally than there ever has been. It's time that countries like Australia lifted their game and said we have the responsibility here to share with the rest of the world."

Canberra said last week the delay in processing the refugees was due to stringent security checks.