Ideogram, a fuming red face with angry eyes and a downturned mouth, prompted a brief back-and-forth in parliamentary hearings about Australian-Russian relations 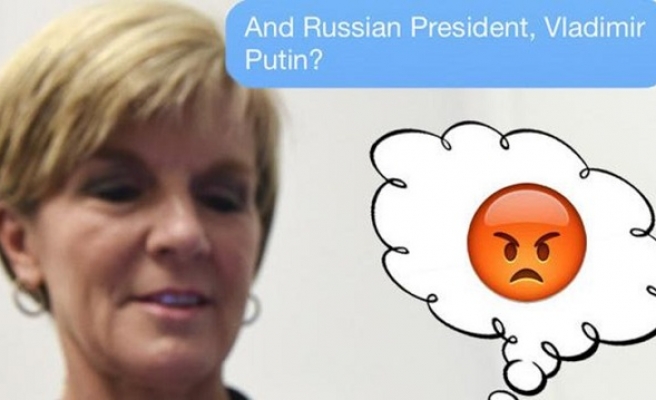 The Australian foreign minister's use of a red-faced emoji to depict Russia's Vladimir Putin sparked debate among lawmakers in Canberra Thursday, demanding to know what the icon means for relations between the nations.

The image was used to describe the Russian leader when Foreign Minster Julie Bishop, who regularly tweets the icons, conducted what was dubbed as the world's first political emoji interview with website Buzzfeed in February.

The ideogram -- a fuming red face with angry eyes and a downturned mouth -- prompted a brief back-and-forth in parliamentary hearings about Australian-Russian relations.

"I'm trying to understand what is the public message from Australia's foreign spokesperson about our relationship -- which is obviously, shall we say, a difficult one -- with Russia, which is being expressed via emoji," said opposition Labor senator Penny Wong during the hearing.

"It may be that the foreign minister is saying she is angry with him. It may be that she thinks he is a red-faced angry man. I don't know."

Attorney-General George Brandis replied that the red face "could be a reference to ideology", alluding to Russia's communist past.

"Nobody suggests, and I don't understand you to be suggesting, that the communication concerned was a formal diplomatic demarche of any kind," he said.

"It's plainly not an expression of our relationship with Russia."

Bishop later told reporters that Putin, as a "hard man", would have liked the emoji.

"In the case of President Putin, he self-describes as a hard man," she said, the Australian Associated Press reported.

"Having met President Putin I think he'd be delighted with the... emoji that I used to describe him."

Australia's diplomatic relations with Russia have been tense since Malaysia Airlines flight MH17 was shot down over Ukraine in July last year, killing 298 people, including 38 Australian citizens and residents.