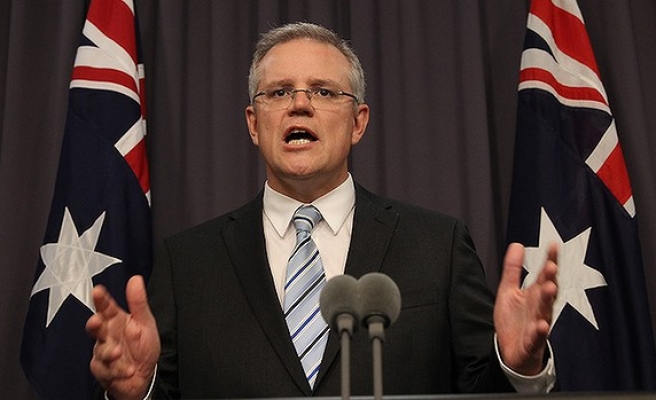 Australia's federal treasurer has blasted a primary school that thrives on its multicultural approach to education for allowing some students to be excused from singing the national anthem during the Muslim month of mourning.

Scott Morrison referred to the decision by Cranbourne Carlisle Primary School -- motto "Many Cultures, One Community" -- as "just pathetic" in an interview with Australian radio channel 3AW early Wednesday.

"I just shook my head and went that is just doing nobody any favours. Some do-gooder has tried to make a point and they have ended up damaging the whole show. So they get the 'Muppet of the Year' award from me for that," he said, using a derogatory term suggesting stupidity.

The school -- in a suburb of Melbourne, Victoria -- hit the headlines earlier this month when it gave students the choice to leave the years 2-6 assembly, citing the Islamic month of mourning -- Muharram.

A grandparent who attended the assembly told local media that as those in the hall were about to stand for the anthem, a teacher said that if any student found this against their culture they could leave.

"When we had finished... they all reappeared into the hall and sat with their classmates."

School Principal Cheryl Irving has stood by the decision, saying it was made solely to reassure the children.

"Anyone who was unable to listen to music due to the cultural observance [of Muharram] was given adequate time to comply with their religious belief," Star News reported her as saying Oct. 20.

Muharram is the Islamic month of mourning marking the murder of the Prophet Muhammad's grandson, Imam Hussein, during which some Shia Muslims fast for 12 days and refrain from joyful events.

In some rare cases, they also perform self-flagellation, sometimes with chains and blades to remember the pain Hussein went through.

On Tuesday, Irving continued her defense.

"They [the children] knew that they should not be taking part in music. They also knew that the national anthem had music, so they were caught in a dilemma and didn’t know what to do," Irving told Channel 10’s The Project.

"Some stood to leave, so the teacher intervened and gave them the opportunity to move out quietly, so they weren’t confused and they weren’t upset."

She underlined that the decision illustrated the school's belief in "great tolerance and understanding of the heritage and cultures of others".

Education Minister James Merlino has thrown his support behind the school, stating that it had shown "respect and sensitivity to the different cultures and faiths within its community", and that the action of the students "was not a sign of disrespect".

"Outside of this observance period these students gladly participate in singing and music in school, including our national anthem," Merlino said.

"The motto of Cranbourne Carlisle Primary School is ‘Many Cultures, One Community.’ This is a sentiment that we should all remember and strive to uphold in our great state."

Councillor Rosalie Crestani from the City of Casey, which incorporates Cranbourne, described the community to Anadolu Agency on Wednesday as "low socio economic and unfortunately high crime and high domestic violence".

Crestani -- who said she supports Morrison’s opinion -- added that the area has a high migrant population.

- The muppets were one of a group of playful, fun puppet characters that appeared on The Muppet Show between 1976 and 1981. To call someone a Muppet -- often used mildly affectionately -- suggests they are stupid, incompetent, idiotic, inanimate or somehow not there.