Australian PM Gillard is heading for a shock defeat at elections on August 21, a new opinion poll showed. 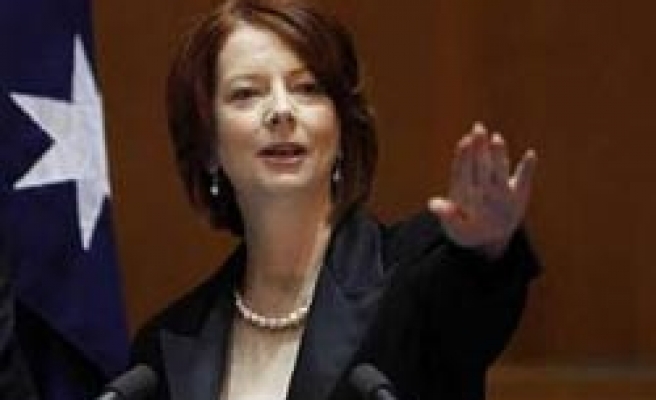 Australian Prime Minister Julia Gillard is heading for a shock defeat at elections on August 21, a new opinion poll showed Saturday, as government infighting and damaging cabinet leaks threatened to derail her campaign.

Defeat for Gillard, though still considered unlikely by most other opinion polls and political experts, would sink her plans to slap a 30 percent tax on iron ore and coal mines, to introduce carbon-trading and to build a $33 billion-plus broadband network.

Gillard took the leadership barely five weeks ago from unpopular predecessor Kevin Rudd, who was dumped by his own Labor MPs, but their gamble on the country's first woman prime minister leading them back to government is looking riskier by the day.

The latest Nielsen poll, published in The Sydney Morning Herald and The Age newspapers, showed that support for Gillard's Labor party had dived six percentage points to 48 percent, behind the conservative opposition with an election-winning 52 percent.

Opinion polls have been erratic but, on balance, they have favoured Gillard. The Reuters Poll Trend, a statistical analysis that aims to smooth out the volatility of differing poll results, shows Gillard winning a slightly increased majority.

The new Nielsen poll shows two-thirds of voters still expect Gillard to win, despite many shifting to opposition leader Tony Abbott, but it will still come as a shock for Labor which is struggling to heal the wounds of Rudd's dumping.

On the campaign trail on Saturday, Abbott dismissed the latest poll results and said he remained "very much the underdog" in the election.

The new poll, conducted over two days this week, followed leaks of cabinet discussions to newspapers which said they showed Gillard, the then deputy prime minister, had opposed decisions to boost the state pension and paid paternity leave.

"It encompassed the darkest two days of the campaign for the government which were dominated by damaging cabinet leaks against Ms Gillard, for which Mr Rudd was blamed," The Sydney Morning Herald said under a front-page headline "Abbott seizes the lead.

If the August 21 election were to mirror the latest poll results, the opposition would win an additional 28 seats in the lower House of parliament, 11 more than it needs to form a government, The Sydney Morning Herald said.

Rudd, who is recontesting his parliamentary seat on August 21, has denied he or his camp is behind the recent cabinet leaks and has reaffirmed his support for Gillard's campaign, but the damaging leaks against her continued Saturday.

The Australian newspaper, quoting unnamed sources, said Gillard as deputy prime minister had skipped national-security meetings and instead sent a junior staffer, her former bodyguard, to stand in for her at the cabinet-level discussions.

The story, which Gillard has declined to comment on, citing cabinet confidentiality, follows similar reports this month that Rudd had also skipped the same meetings -- a pattern of leaks that highlights bad blood between the Gillard and Rudd camps.

Rudd is currently in hospital to have his gall bladder removed and has promised to return to the campaign for Gillard and the Labor party when he is well enough. His wife said on Saturday he was recovering well from the operation.

Labor cabinet minister Craig Emerson told ABC radio on Saturday the government still had three weeks to appeal to voters before polling day but conceded the election would be close.

"This election is on a knife-edge," he said.