Greens Senator Sarah Hanson-Young says country is ill-equipped to deal with Australian asylum seekers - a majority of whom are Muslim. 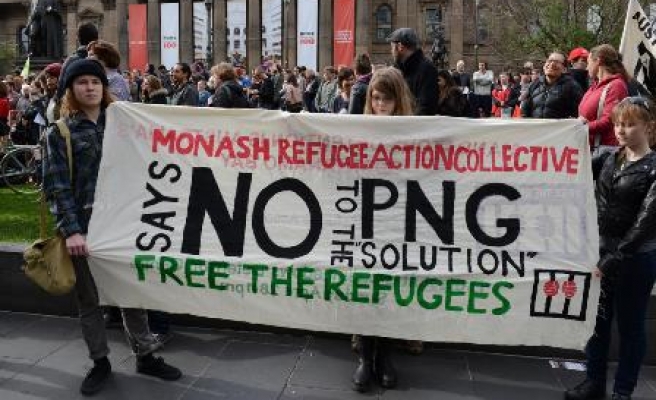 Australian Greens Senator Sarah Hanson-Young blasted her country's plans to resettle refugees in Cambodia on Tuesday, saying the Southeast Asian nation is ill equipped to even take care of its own people.

Hanson-Young, who arrived in Cambodia Saturday for a short visit to assess its ability to accept refugees from Nauru, said Australia’s plans for refugees in Cambodia are “not sufficient.”

The Australian government runs a detention center on the South Pacific outpost for people seeking asylum on its own shores - a majority of whom are Muslim.

Cambodia’s Interior Minister Sar Kheng and Australian counterpart Scott Morrison signed the $40-million deal in Phnom Penh in September, clinking glasses of champagne as the ink dried. It was met with protests by Cambodians who say the government should be doing more to improve livelihoods here than taking in refugees.

Hanson-Young on Tuesday cited a meeting she'd had with a Rohingya refugee called Tayab as one of the reasons why she feels the deal is ill thought out.

“The majority of the asylum seekers in the detention center in Nauru are Muslim,” she told The Anadolu Agency in an interview on Tuesday, “but there’s also a number of Rohingya, so people just like him.

She said that Tayab rents a small room in Phnom Penh, where he sells roti and earns less than $5 a day.

“He’s been here for four years and he cannot sustain himself. He struggles to pick up the language… English he’s taught himself. It’s not that he’s incapable—Khmer just seems to be very difficult. The fact that there is no real identity of refugees in Cambodia means they struggle to legitimize themselves in any way.”

According to the memorandum of understanding signed between the Cambodian and Australian governments in September, Australia will assist in the settlement of the refugees in Cambodia for a 12-month period. That includes access to Cambodia’s public education and health systems, which are woefully underperforming.

“After that, they are on their own,” Hanson-Young said. “It is not sufficient, it is totally unrealistic. If he [Tayab] can’t do it in four years, how on earth do we think the Australian government will magically make it work? He does not feel safe here, he has no sense of belonging and he is looking for the next way out.”

Both governments have said the resettlement would be on a voluntary basis, but most of the refugees on Nauru—many of them Iranian Muslims—have said they do not want to go to Cambodia.