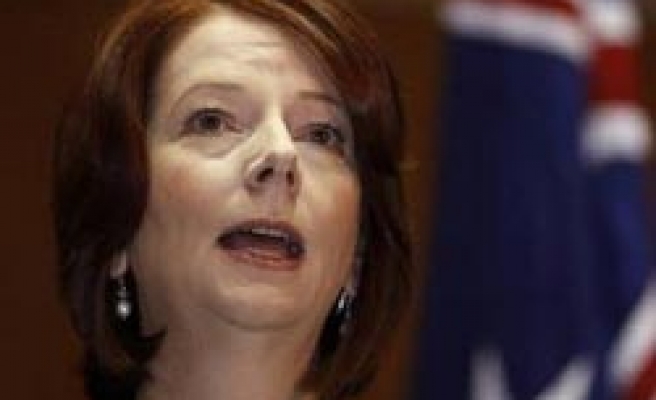 Australia's Labor government has a narrow lead over the conservative opposition, an opinion poll showed on Monday, with just five days left of campaigning in what is one of the tightest elections in many years.

The Aug. 21 vote will decide the fate of the government's planned 30 percent mining tax on big iron ore and coal miners, such as BHP Billiton, Rio Tinto and Xstrata, and its plans for a $33 billion national broadband network, involving Australian telco Telstra.

The conservative opposition led by Tony Abbott has promised to abandon both policies, as well the government's plans for a future carbon trading scheme to fight climate change.

Australia's power sector, which includes AGL Energy, says the absence of a clear climate policy and carbon price is now hindering investment in the sector.

Gillard will on Monday officially launch Labor's campaign in Brisbane in the crucial battle-ground state of Queesnland, focusing on economic management as the key election battleground.

The latest Reuters Poll Trend also shows Labor marginally ahead, as the tightest race since 1998 points to the possibility no single party will form a government after Saturday's election.

A Newspoll poll published on Monday was the second in a few days which showed Labor with a lead over the opposition, although polls have shown the lead changing hands frequently.

Support for Labor was at 52 percent while the conservative coalition was also on 48 percent on a two-party preferred basis, the Newspoll survey in the Australian newspaper showed.

On the key issue of economic management, Labor had cut the opposition's 12 point lead three weeks ago to now be level.

Labor is struggling to hang on to marginal seats in several areas, particularly Queensland, a key resource state where plans to increase taxes on mining and Kevin Rudd's ousting as party leader and prime minister have damaged the ruling party.