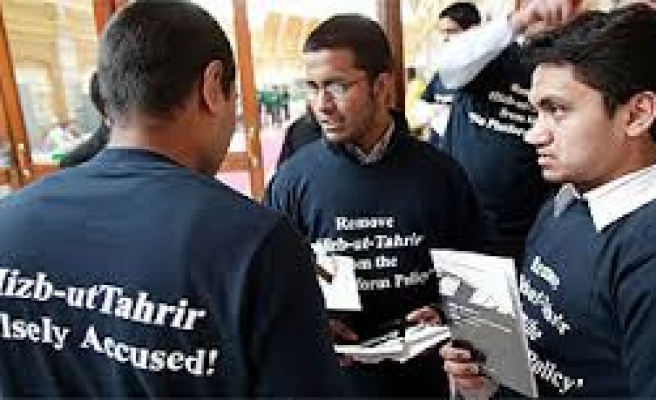 One day before Australia's prime minister's efforts to bring in new security powers to clamp down on extremists, an organization facing a ban says Tony Abbott is using the country's Muslims as a scapegoat to sew up his dwindling popularity.

“It’s a clear case of the prime minister using national security to shore up his personal job security and, more broadly, he’s pulling out the good old national security card to tap into the politics of fear to gain political points," Uthman Badar told The Anadolu Agency on Sunday.

Badar is the spokesperson for Hizb ut-Tahrir, an international Muslim organization founded in 1953 that advocates a single Islamic state - or caliphate - in the Middle East under Islamic law. It has already been banned in several countries.

On Monday, Prime Minister Tony Abbott will deliver his National Security Statement in Australia’s national capital Canberra and he has indicated that Hizb ut-Tahrir is in his sights.

“If cracking down on Hizb ut-Tahrir and others who nurture extremism in our suburbs means further legislation, we will bring it on,” Abbott said in an address to the National Press Club early February.

He initially hit out at the organization in October in an interview on Fairfax radio, saying it had an ideology that justifies terrorism.

"And that’s why I say it’s un-Australian,” he added. “It’s also un-Islamic because no respectable Muslim should have these views."

“This is an organization which is very careful to avoid advocating terrorism, but is always making excuses for terrorist organizations, and I regard that as un-Australian,” he said.

“Abbott is just using the Muslim community as a scapegoat and he’s targeting Hizb ut-Tahrir because we’re the most outspoken," he says. "He’s using us as a political football... There is no evidence to justify the prime minister even suggesting a ban.”

The grand mufti of Australia has sided with Hizb ut-Tahrir on this, while Australian Attorney-General George Brandis has said the group had for a long time been "close to the edge."

"We are concerned that Hizb ut-Tahrir is feeding a climate which makes it easier for terrorist recruiters to do their work," he told ABC television on Friday.

Badar - who would not reveal the number of Hizb ut-Tahrir members in Australia - poured scorn on such notions, referring to the organization as a political party.

“We oppose and we challenge ideologically, intellectually and politically and it appears to be that in a liberal democracy that’s not acceptable,” he said.

Despite public declarations that it rejects democracy, Badar is adamant that the caliphate that the group wants to establish is solely in countries where the majority practices Islam.

“The controversy is around the fact that due to media propaganda people assume that our aim to establish the caliphate is in Australia.

“That’s incorrect. Our aim is to establish the caliphate in the Muslim world,” he said

He said that Hizb ut-Tahrir opposes what the Australian Government is “trying to impose on the Muslim community in terms of enforced assimilation and a moderate Islam.”

“As far as policy is concerned it’s what we call 'institutionalized paternalism in its management of Islam,' which is given legitimacy in this country," he says.

He denied that a video of a Hizb ut-Tahrir led meeting in Lakemba, New South Wales, in October last year showed them radicalizing children as young as six, as asserted by Channel Seven, or that a meeting in January this year was calling on the formation of an army to instigate Sharia Law in Australia.

“They [the Channel Seven broadcasts] were deliberately misleading viewers,” he said.

On Friday, Grand Mufti Dr. Abu Mohammed, spoke out against a possible ban on Hizb ut-Tahrir.

Abbott retorted, saying the mufti's comments were wrong-headed and unhelpful. That response evoked the wrath of 64 Muslim organizations and 42 community and religious leaders.

In a statement, they accused Abbott of “bullying” the nation's highest Islamic leader, and said his threats to tackle and crack down on Islamic groups whose only crime has been to speak out about his stance towards Muslims were "politically convenient"

Badar sighs into the telephone. There's a pause before our interview continues.

“In the West our work has never been to institute systemic change; it’s just ideological,” he declares. “That’s precisely why we’re legal in the U.S. and the U.K. and Australia for the past two decades. If we [were] working here to substitute a democracy with [a] caliphate do you think we’d be legal?”

He says that if the group is banned come tomorrow evening “it would contravene the basic premise of a democracy which allows people to express their views as long as they’re not violent.”

Hour after the interview is over he sends an email message to AA.

He says his message to Tony Abbot is: "You can't suppress Hizb ut-Tahrir by bans or threats thereof."

"Learn from the example of the despotic regimes in the Muslim world. Ideas can't be banned. But they can be challenged and debated, if you're up for it."