Obama toughens line on Putin over Ukraine at G20 summit

Obama, who described his meetings with Putin this week as "blunt and business-like", said that he had made it clear Russia would remain isolated if it continued to provide support to separatist rebels 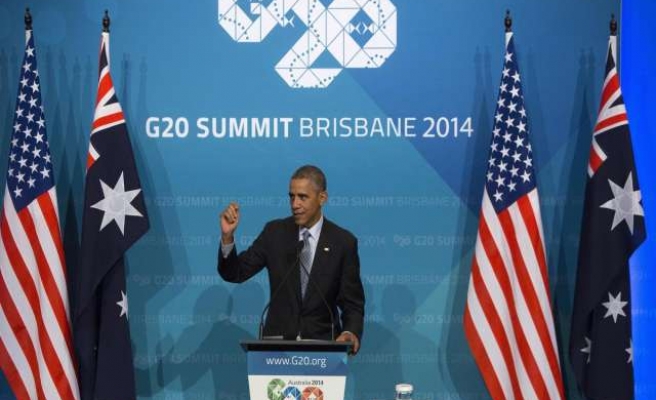 U.S. President Barack Obama said on Sunday that Russia would remain isolated by the international community if President Vladimir Putin continued to violate international law in Ukraine, some of his toughest remarks yet on the crisis.

Putin has come under intense pressure from other leaders at this weekend's G20 summit in Brisbane over his government's backing for pro-Russian rebels in Ukraine, where a conflict has killed more than 4,000 people this year.

Obama, who described his meetings with Putin this week as "blunt and business-like", said that he had made it clear Russia would remain isolated if it continued to provide support to separatist rebels.

"We are also very firm on the need to uphold core international principles. And one of those principles is that you don't invade other countries or finance proxies and support them in ways that break up a country that has mechanisms for democratic elections," Obama said at a press conference.

On Saturday, Western leaders warned Putin that he risked more sanctions if he failed to end his country's backing for the separatists. Russia has denied any involvement.

"At this point the sanctions we have in place are biting plenty good," said Obama, speaking after the Group of 20 meeting in Brisbane, Australia. "We retain the capability, and we have our teams constantly looking at mechanisms in which to turn up additional pressure as necessary."

On Syria, President Bashar al-Assad was warned against his military engaging U.S. warplanes conducting operations against Islamic State militants on its territory.

"We have communicated to the Syrian regime when we operate going after ISIL in their airspace, they would be well advised not to take us on," he said, using another name for Islamic State.

Obama ruled out a political solution to the civil war in Syria that would leave Assad in power and denied reports that his administration was conducting a formal review of its military policy in the country.

He accepted, however, that it was the "nature of diplomacy", that Washington would eventually have to deal with some of its rivals to bring peace to the war-wracked country.

"At some point the people of Syria and the various players involved, as well as the regional players, Turkey, Iran, Assad's patrons like Russia, are going to have to engage in a political conversation," he said.

BACK TO DOMESTIC AFFAIRS

Switching to domestic politics as he wraps up a week-long swing through Asia, Obama said that he was taking a wait and see approach to the Keystone XL pipeline bill approved by the Republican-led U.S. House of Representatives on Friday.

A similar measure struggled to get enough support in the Senate, and Obama has indicated he might use his veto if the bill does get through Congress.

"We are going to let the process play itself out," he said.

"But I won't hide my opinion about this, which is that one major determinant of whether we should approve a pipeline shipping Canadian oil to world markets, not to the United States, is 'does it contribute to the greenhouse gases that are causing climate change?'"

Obama also promised not to allow the threat of another government shutdown to deter him from enacting comprehensive immigration reform despite opposition from Congress.

"I take Mitch McConnell on his word when he says the government is not going to shut down," he said, referring to the incoming Republican Senate majority leader.