Protests not over at Australian detention centre

A group of 70 refugees have been imprisoned over their involvement in the protests, while others are being held in isolation in the camp's medical facilities. 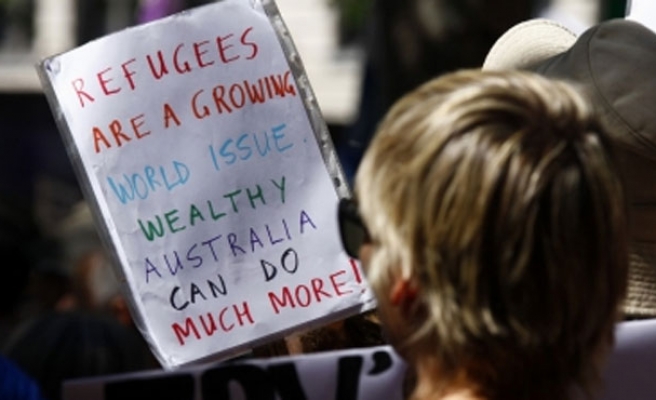 A protest by hundreds of asylum seekers at an Australian detention centre in Papua New Guinea, where some had sewn their lips shut in protest, had not ended despite government statements to the contrary, rights advocates said on Wednesday.

In February 2014, one person was killed and more than 70 injured during riots at the immigration detention centre on Manus Island in PNG after residents overran the camp and attacked detainees.

More protests began last week after asylum seekers were told they would be moved into new accommodation, which they feared would make them more vulnerable to attack by Papua New Guineans opposed to their presence.

Journalists are barred from visiting Manus Island, so information about the protests cannot be verified independently.

On Tuesday, Australian Immigration Minister Peter Dutton and officials in Papua New Guinea said a peaceful end to the protests had been negotiated, despite footage seen by Reuters showing riot police forcing their way into the facility.

Refugee advocates and asylum seekers inside the compound contradicted his assessment on Wednesday, saying the protests had spread further despite attempts to end them.

"Our ... hunger strike entered its ninth day and it will continue," a group of around two dozen refugees said in a handwritten letter posted on an advocacy group's website.

"We will continue our push until we reach our ultimate goal which is FREEDOM."

A group of 70 refugees have been imprisoned over their involvement in the protests, said Ian Rintoul, executive director of the Refugee Action Coalition, while others are being held in isolation in the camp's medical facilities.

"They are systematically removing people from compounds who they believe are ring leaders," Rintoul said.

A spokesman for Dutton did not respond to requests from Reuters for comment on Wednesday.

Under conservative Australian Prime Minister Tony Abbott's tough policy, none of the thousands of asylum seekers will ever be eligible for resettlement in Australia, even if they are found to be genuine refugees.

Several detainees have reportedly swallowed razor blades or detergent as acts of self-harm, citing the despair of endless detention as a major factor in the protest.