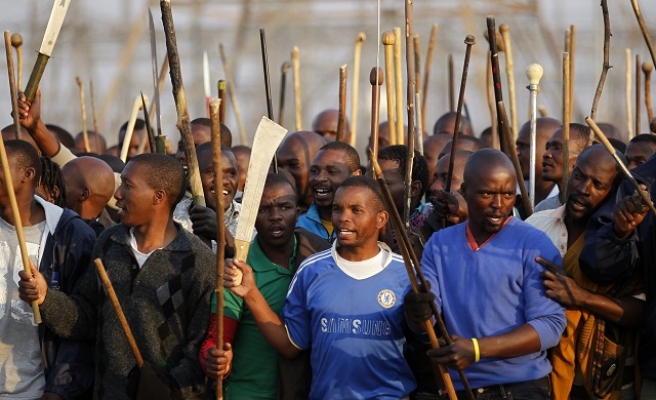 “It is a real threat - the electricity supply could get less reliable and the impact is quite large for the economy as a whole,” economist Collen Garrow told Anadolu Agency.

South Africa depends on coal to generate more than 85 percent of its electricity supply.

Last year, power supplier Eskom, which provides 95 percent of the country’s electricity, introduced power cuts due to a shortage of coal and the need to renovate old power plants.

Garrow said the strike could also damage South Africa’s trade accounts as coal is one of the country’s key exports to Europe and Asia.

In August, President Jacob Zuma said electricity constraints experienced by his country were hindering economic growth, costing the economy around 1 percent in economic growth a year.

NUM Deputy Chairman Nelson Ratshoshi said he could not predict the length of the strike. “I cannot tell how long the strike will take,” he said. “If the employers meet our demands the strike will be called off.”

The union has demanded a 14 percent wage increase for its members, against to 5 to 8.5 percent rise offered by mine managers.

Dr. Azar Jammine, director and chief economist at independent consultancy Econometrix, said a prolonged strike would have a major impact on the economy.

“In the long run, the strike could result in reduced exports of coal and impact us on electricity supply,” he told Anadolu Agency.

“It’s probably too early to predict the impact since the strike has just begun but it’s not a favorable development.”