﻿The road in which Bosnian victims used to escape from the Serbian massacre holds a “peace march” organization with a high participation, between 8-11th July. 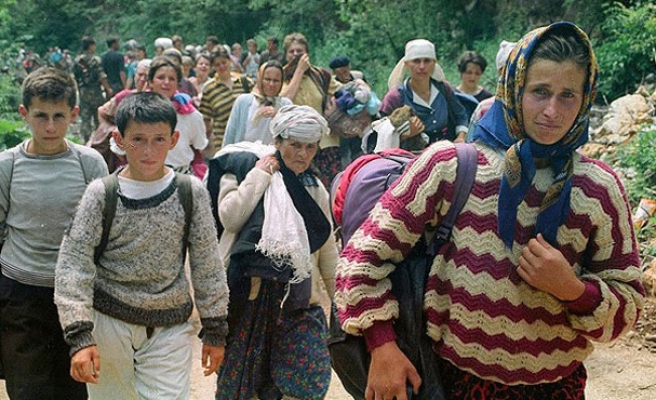 The road in which Bosnian victims used to escape from the Serbian massacre holds a “peace march” organization with a high participation, between 8-11th July.

A "peace march" with more than 5,000 participants from all over the world began Tuesday in Bosnia-Herzegovina to commemorate the 19th anniversary of the Srebrenica massacre. The march will last for three days.

Early on Tuesday morning, thousands of people -- primarily from European and Arab countries -- gathered on “Death Way” to commemorate the victims of the Srebrenica massacre. In 1995, about 8,000 Muslim men and boys were killed by Bosnian Serb forces under the command of Gen. Ratko Mladic, in what is considered the worst massacre on European soil since the Nazi era.

Mladic is on trial in The Hague, Netherlands, accused of committing war crimes, crimes against humanity and genocide.

This is the 10th anniversary of the first peace march. Marchers began their walk in the town of Nezuk and they will walk to a cemetery in Potocari, a village in eastern Bosnia-Herzegovina, just northwest of the town of Srebrenica. The walk is approximately 35 kilometers (22 miles) per day. Marchers will spend three days on the road. At nights, they will stay in wooded areas previously designated for them.

After the march, a funeral prayer will be offered for 175 newly found genocide victims who will then be buried in the memorial tombs in Potocari.

The organization will inform the participants about the genocide during the three-day walk, drawing on the memories of those who survived the Serbian attacks.

Hamdi Fejzic, the chairman of “peace march” organizing committee said the march will send a message of peace, tolerance and coexistence. He said it is important not to forget the people who lost their lives.