More than 12,600 refugees arrived in Slovenia over a 24-hour period, police says, a record that surpasses even that in Hungary at the height of the crisis in Sept 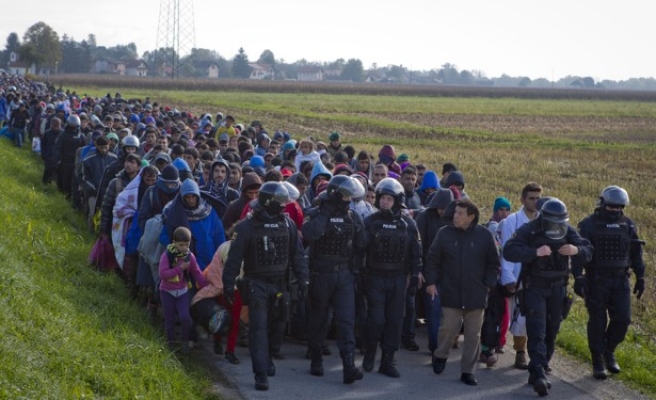 More than 12,600 refugees arrived in Slovenia over a 24-hour period, police said, a record that surpasses even that in Hungary at the height of the crisis in September.

On September 23, Hungary, which has since closed its borders, counted a record 10,046 arrivals in one day.

Another 10,000 were expected in Slovenia on Thursday, as the country of two million people became the latest state to see a surge of refugees desperate to reach northern Europe before winter.

Between 2,000 and 3,000 were expected to enter Slovenia Thursday morning from Croatia in one sector alone, police said.

In response to the crisis, the parliament voted early Wednesday to grant greater powers to the army and allow soldiers to join border police in patrolling the 670-kilometre (416-mile) frontier with Croatia.

The European Union on Wednesday called a mini summit with Balkan countries in Brussels on the refugee crisis.

The continent has been struggling to find a unified response on how to tackle its biggest migration crisis since 1945.

More than 600,000 refugees and refugees, mainly fleeing violence in Syria, Iraq and Afghanistan, have braved the dangerous journey to Europe so far this year, the UN said.