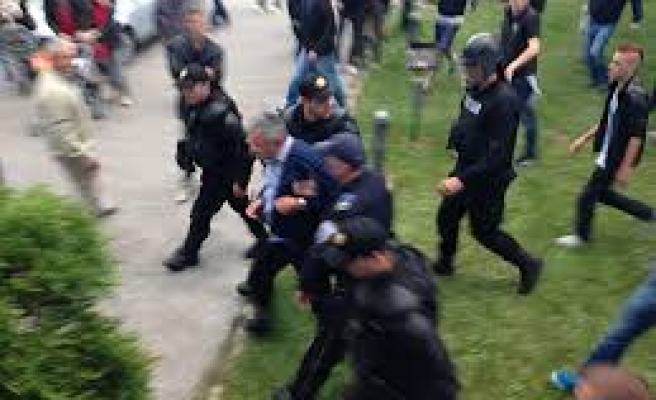 More than 130 people, including 104 police officers, were injured on Thursday in a second day of anti-government demonstrations in the Bosnian town of Tuzla, as protests over unemployment and political inertia spread across the country.

The protests highlight public resentment over the political bickering that has stifled governance and economic development since the 1992-1995 war in the Balkan country.

Police fired teargas to drive back several thousand people throwing stones, eggs and flares at a local government building in Tuzla, once the industrial heart of Bosnia's north which has been hit hard by factory closures in recent years.

The town's emergency service said it admitted 104 police officers who were seriously hurt, and 30 civilians with lighter injuries.

Hundreds of people turned out in solidarity protests in the capital Sarajevo and the towns of Zenica, Bihac and Mostar. In Sarajevo, protesters clashed with police who had blocked traffic in the city centre. Four officers were taken to hospital, officials said.

The prime minister of Bosnia's autonomous Bosniak-Croat federation, where the protests took place, held an emergency meeting with regional security ministers and prosecutors.

"We put on one side the workers who were left without basic rights, such as pensions and health benefits ... , and on the other side all hooligans who used this situation to create chaos," Prime MinisterNermin Niksic said after the meeting.

"We will not come to the solution by destroying property, damaging vehicles and windows and fighting the police," Niksic said, adding that police and prosecutors should take steps against those he called the hooligans.

The protesters were initially made up mainly of workers laid off when state-owned companies that were sold off collapsed under private ownership. They have been joined by thousands of jobless people and youths.

At 27.5 percent, Bosnia's unemployment rate is the highest in the Balkans.

"It was our government that sold state assets for peanuts and left the people without pensions, jobs or health insurance," said 24-year-old Hana Obradovic, an unemployed graduate from Sarajevo.

Authorities in Tuzla ordered schools to cancel classes on Friday, when protests are expected to continue. Demonstrations are also to be held in Sarajevo and other cities.

The authorities released 27 people who had been arrested on Wednesday.

Many people say feuding political leaders, brought to power by a power-sharing system created under Bosnia's 1995 peace deal, offer few solutions for its problems. They view many politicians as deeply corrupt.