175 Srebrenica victims to be buried on 19th anniversary

175 newly identified victims of the 1995 massacre in eastern Bosnia to be reburied in solemn commemoration of its 19th anniversary. 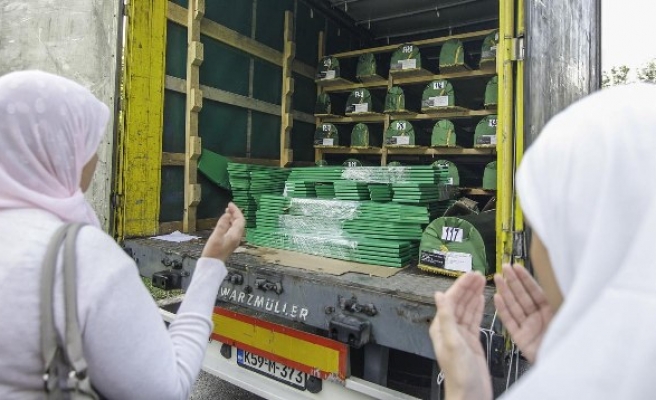 Newly identified bodies of 175 Srebrenica victims will be buried in Potocari cemetery Friday, on 19th anniversary of the massacre.

During the ethnic war in Bosnia, Srebrenica, which had been declared as safe zone by United Nations, was captured by Bosnian Serbian troops under the command of Gen. Ratko Mladic on July 11, 1995. Dutch soldiers serving under UN command left the area, leaving the the Bosniak Muslims at the mercy of Mladic's troops.

More than 8,000 Bosnians were massacred in forests, fields, factories and warehouses. The bodies of victims were buried in mass graves across the region, and some are still being found and identified to this day.

Mladic, 70, is now on trial in The Hague, Netherlands, accused of committing war crimes, crimes against humanity and genocide.

Serbian President Tomislav Nikolic apologized last year for "all crimes committed by Serbs" during the war in Bosnia. But he refused to call the massacre in Srebrenica "genocide."

Among the newly identified bodies, the youngest victim was 14 years old, Senad Beganovic. Hurem Begovic, the oldest, was 79.

Parts of the body of Senad Beganovic, the 14 year old, were found in four different mass graves and pieced together after DNA analysis. Besides Beganovic, there are 14 victims under 18, among the newly identified bodies.

This year's commemoration will take place after Friday prayers. Among the notable officials attending will be Bekir Bozdag, the Turkish justice minister.

Fatima Muhic, the youngest victim of the massacre, was buried last year. She died on the day she was born. Hava Muhic, her mother, wanted her child’s name on a grave stone, rather than reposing under a "nameless" stone.

After Friday's burial in Srebrenica, 6,241 bodies will lie buried in Potocari cemetery. Research is still being done by organizations like the Missing Persons Institute of Bosnia-Herzegovina and the Mothers of Srebrenica to find and identify the missing bodies of about 2,000 remaining victims, .

Thousands of people who gathered from various different countries walked for more than 100 kilometers over three days, from town of Nezuk to Potocari cemetery, near Srebrenica.

The "Peace March" has been organized annually for 10 years, between July 8 and 11.

The survival walk of Bosnian civilians in 1995 was called the "Death March." Only about 3,500 people were able to reach safety in the village of Tuzla, after a seven-day walk. The "Peace March" takes place on the same route, according to information provided by Kemal Hajdarevic, a survivor of massacre.