Four former Bosnian Serb army soldiers have been charged with genocide over the killing of at least 800 Bosnian Muslims from Srebrenica in 1995, Bosnia's war crimes court said. 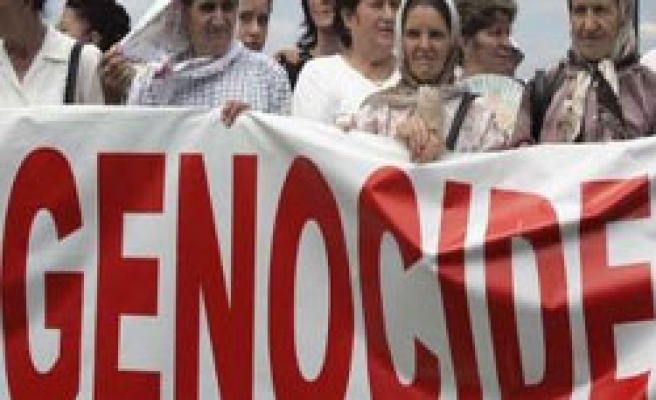 Four former Bosnian Serb army soldiers have been charged with genocide over the killing of at least 800 Bosnian Muslims from Srebrenica in 1995, Bosnia's war crimes court said on Friday.

Franc Kos, Stanko Kojic, Vlastimir Golijan and Zoran Goronja all served with the Bosnian Serb army's 10th commando unit. They have been detained since their arrest earlier this year.

In a statement, the court alleged the accused "took part in the execution of more than 800 Bosniak (Bosnian Muslim) men and boys from the U.N. safe area of Srebrenica, who were transported to the execution site at Branjevo Farm".

Kos, who was born in Slovenia but also had Bosnian citizenship, led the 10th commando unit's First Bijeljina Platoon, and the other three were regular soldiers.

"The ... accused are charged that as co-perpetrators they participated in the killing of Bosnian men and inflicted on them severe physical and mental injuries, all with the aim of destroying, in whole or in part, the national, ethnic and religious group of Bosniaks," the court statement said.

Bosnian Serb troops killed about 8,000 Muslim men and boys after capturing the U.N.-protected eastern enclave of Srebrenica in Europe's most serious atrocity since World War Two.

Many of the Muslim men tried to escape through woods but they were hunted down, captured and slaughtered by Bosnian Serb forces at several locations near Srebrenica.

Branjevo Farm was one of the execution sites. Investigators found that the remains of the victims were first buried at one mass grave and later dug out with bulldozers and transferred to other locations to cover up the crime.

The prosecution says Kos and Kojic were suspected of checking whether victims were still alive and killing anyone still breathing.

The Srebrenica massacre is among the indictments against Bosnian Serb wartime leader Radovan Karadzic, whose trial is in progress at the U.N. war crimes tribunal in The Hague, and his fugitive army chief general Ratko Mladic.

The Hague-based International Criminal Court for the Former Yugoslavia (ICTY) has passed sentence on 14 Bosnian Serbs on charges related to the Srebrenica massacre.

The Bosnian war crimes court, set up in 2005 to relieve the burden of the Hague-based tribunal, has put dozens of Serbs on trial for the Srebrenica killings. Twelve have been jailed, seven acquitted and 11 are still being tried.

can you please correct this news it is 8000 tousend