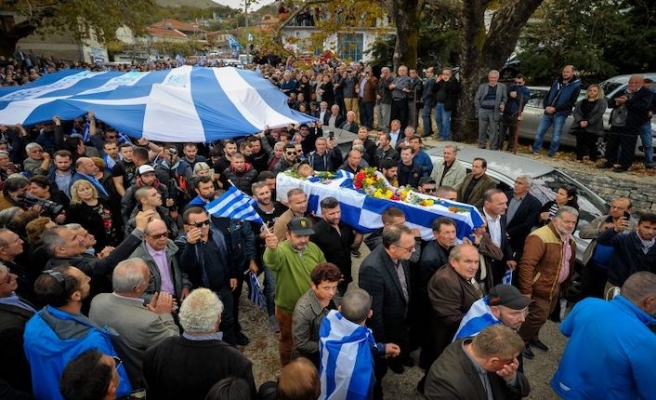 Tirana has banned 52 Greek nationals from entering the country over what it labelled their "extremist" behaviour at the funeral of an ethnic Greek man killed by Albanian police, an official said late Friday.

In Athens, the Greek foreign ministry said it expected "meaningful clarifications" over the move.

"At this sensitive moment we expect the Albanian side to desist from actions and statements that further charge the atmosphere in our bilateral relations," the ministry said in a statement.

The 52 were among hundreds of people, many from Greece, who attended the funeral of Konstantinos Katsifas on Thursday.

The 35-year-old, who had both Greek and Albanian passports, was killed during a shootout with police in Bularat, a village in southeastern Albania, on October 28.

During the funeral, many mourners, carrying white-and-blue Greek flags, chanted "Konstantinos, you are alive and leading us!"

"Bularat is Greek!" and "Blood is calling us, set Albanians on fire!"

Tirana described Katsifas as a Greek "extremist" who had fired a Kalashnikov in the air in the centre of the village, near a ceremony being held to commemorate Greek soldiers who fought in World War II.

A 30-minute shootout ensued after police tried to apprehend him.

Greece said the loss of life was "unacceptable" and requested a full investigation, while some Greek nationalist groups have protested against the killing, firebombing an Albanian tourism office in Athens.

"In every country ... it is very well known what happens if one stands against police," Albanian Foreign Minister Ditmir Bushati said in a statement Friday.

He said the "extremism manifested during the funeral in Bularat ... harms the friendship between the two people."

The size of the ethnic Greek minority in Albania, concentrated in the south, is disputed. A 2011 census put it at 25,000 out of an overall population of 2.8 million.

Some 600,000 Albanians have also emigrated to Greece since the fall of communism almost 30 years ago.

The neighbours have a number of other long-running disputes, including a disagreement over their maritime border, which is believed to straddle lucrative energy resources.

They have yet to officially lift the state of war declared in 1940, although both sides have indicated an intention to do so.