Albania cracks down on marijuana production

"This time we'll put an end to this; law and God are on our side," a commander of a police special forces unit told his men as a Reuters reporter looked on. 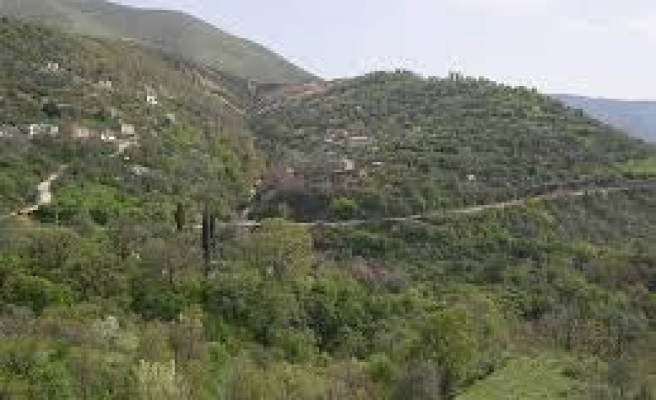 The smoke from burning marijuana plants billowed from a dozen houses on Day Five of Albania's most serious move yet against a southern village, armed to the teeth, that has churned out weed on an industrial scale for more than 15 years.

Lazarat has long blighted Albania's efforts to shed the image of a Balkan badlands since it threw off communism in 1991.

With the fruits of its labour turning up in Italy, Greece and, last year, Germany, Albania has come under increasing pressure from the European Union to crack down on drug producers long considered untouchable, out of reach of the law thanks to a web of corrupt connections to the police and politicians.

Albania hopes to get approval later this month from each of the EU's 28 member states to become an official candidate for inclusion in the group. Crime and corruption are sure to be top of the list of issues that must be resolved before it can join.

Under the command of a new government sworn in in September, police moved into Lazarat on Sunday after coming under fire while spying on the crops planted all along the hillsides the day before. They approached from the south side of the sprawling community, drawing fire from heavy machinegun rounds and anti-tank grenades.

The village of some 5,000 people lives off the proceeds from the marijuana business. Aerial pictures suggest some 60 hectares were cultivated in Lazarat last November with 300,000 plants capable of yielding 500 tonnes of cannabis, or half the total production in Albania.

"This time we'll put an end to this; law and God are on our side," a commander of a police special forces unit told his men as a Reuters reporter looked on. The commander declined to be named.

Moving slowly through the village, hundreds of police officers are ripping up crops and setting fire to them, filling the streets with the acrid smell of burning weed.

The interior ministry has advised people to stay indoors during the operation, and police now occupy about 40 percent of the village. Residents follow the drama live on television; some have taken to burning their own marijuana crops to destroy evidence.

Summing up their five-day operation, police said they have destroyed 80,000 plants and saplings of weed and 12.8 metric tonnes of cannabis, found two drug-processing laboratories and seized weapons and bullets.

Thirteen people have been arrested for planting cannabis and firing weapons at the police. Eighty houses have been searched.

Despite long exchanges of gunfire, there have been no serious casualties so far - four lightly wounded, including two shepherds hit by stray bullets.

"What did I do wrong? I just wanted five plants like everyone else," said Lumturi Koli, a 42-year-old widower, as police on Thursday destroyed her crop of considerably more than five plants.

"I should have been first to plant them because I have to care for my children," she said.

The European Commission, the EU's executive arm, which has recommended Albania for candidate status, welcomed what it said was a successful police operation.

"It clearly shows Albania's determination in fighting drugs and organised crime," it said in a statement. "Clearly, Albania's fight against drugs needs to be further intensified... Swift and effective follow-up by the prosecution and the courts is essential."

In bullet proof vests and helmets, police scaled a hill to take a vantage point over the village. Gunmen hold the north, firing automatic weapons and the odd rocket-propelled grenade.

"They want to dislodge us from that position, but it won't happen, no way," said one of the Special Forces officers.

"All these houses were full of dry weed and plants," he said. "Full, full," he said, in English. Pots to grow saplings were piled up.

One of the units guarded what police say is the biggest drugs laboratory in the village. Its owner has been linked to an incident in 2004 when a reconnaissance helicopter sent by the Italian police was shot at.

The owner says the building is a stable for his cows, but a Reuters reporter saw no evidence any cows had ever lived there. Wires ran from wooden pillars, used to dry cannabis leaves, police say. Four powerful lamps hung from the ceiling.

The village streets were quiet on Thursday, bar the odd inquisitive driver. "This is all political," said one, driving away.

In the nearby village of Dervican, a man whose house bore bullet marks from the exchange of fire debated with a local builder the impact of the police crackdown on this poor southern region.

"The economy will feel the impact all over," said the builder. "They employed a thousand people a day, and supported many more."