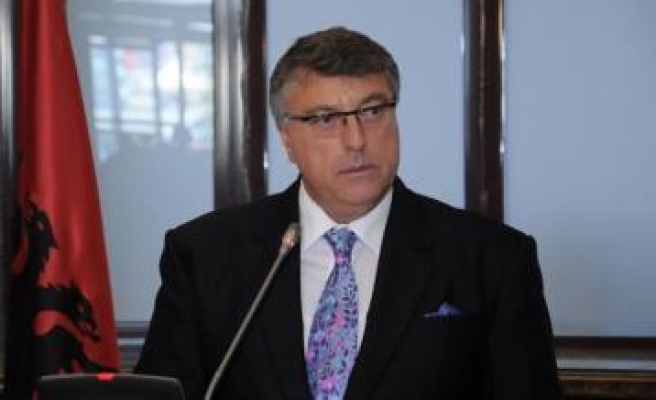 Albania's central bank governor Ardian Fullani was arrested on Friday evening on charges of abuse of office after the theft of 713 million lek ($6.63 million) from the bank vaults by an employee, the prosecutor's office told Reuters.

"The governor has been arrested after a court ruling on charges of abuse of office over the theft at the bank," Albi Serani, an official of the General Prosecutor's Office told Reuters.

Fullani, who the prosecutor's office said had left gaps in oversight at the treasury due to a lack of personnel and regulations, was arrested at his office in the bank and could be sentenced to up to seven years in jail if convicted.

His detention comes five weeks after a worker at the central bank, Ardian Bitraj, admitted stealing money over the course of four years, taking new bank notes printed in Switzerland when they arrived at his workplace and replacing them with old books.

A veteran banker elected for a second seven-year term in 2011, Fullani defended his record at the time, saying it was the bank which had uncovered the theft and that he was cooperating with fellow central bankers to make its operation theft-proof.

An attempt by a member of the supervisory board to unseat him, paving the way for a vote in parliament over his future, was defeated by five votes to one.

The bank's inspector general, Elivar Golemi, was also arrested late on Friday, the 19th central bank official to be held over the theft.

The central bank said Bitraj stole 570 million leks ($5.5 million) in new banknotes and 143 million in old notes meant to be taken out of circulation from Section X, a modern building at the foot of a mountain west of Tirana.

EMPLOYEE "HAD ALL THREE SAFE KEYS"

The prosecutors said Fullani had not proposed a deputy governor for several years, creating a vacuum in the hierarchy meant to supervise the use of banknotes in the vault.

As chairman of the bank's supervisory board, he also failed to get the board to approve the rules for the functioning of the treasury, which led to the theft of the money, the prosecutors said in a statement.

They also found fault with the fact Fullani had appointed an employee, now also under investigation for abuse of office in the same case, to inspect the money twice.

Bitraj admitted taking the money, stealing daily during the World Cup, the official said. According to press reports, he told prosecutors he would act at the end of the working day, when other staff were tired.

He held all the three keys to the vault, which should have been held by three employees, reports citing prosecutors said.

Fullani said the theft was "a grave but isolated case" and the central bank was fully committed to supply the market with the necessary liquidity.

Prime Minister Edi Rama and the International Monetary Fund (IMF) have said they were awaiting the end of the investigations before making any change to the law governing the central bank.

The IMF, whose team in currently in Tirana to check a three-year agreement with Albania, urged the independence of the central bank to be respected.