"The sooner you recognise (Kosovan independence) the sooner we can move ahead," Albanian Prime Minister Edi Rama said, Vucic said Rama's remarks represented a "provocation" and that Serbia would never recognise Kosovo 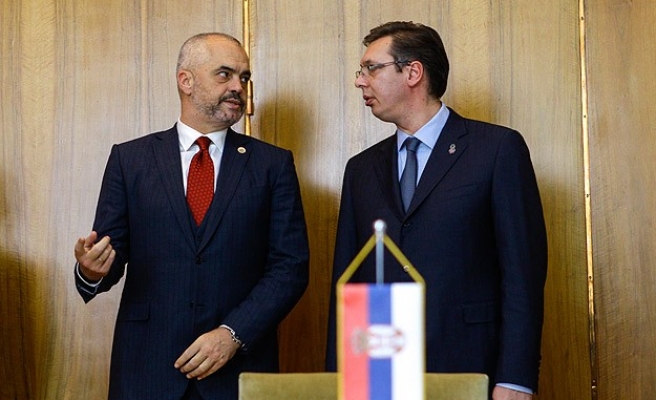 An argument over Kosovo has overshadowed the first visit by an Albanian leader to Serbia in more than 70 years.

The spat came on Monday after Albanian Prime Minister Edi Rama offended his hosts after arriving on an official high-level visit - the first since former Albanian President Enver Hoxha met Yugoslav President Josip Broz Tito in 1947 - and declaring in Belgrade: "The independence of Kosovo is a reality."

The comment was taken as an insult by Serbian officials, with Serbia's Prime Minister Aleksandar Vucic saying: "I will not allow anyone to humiliate Serbia in Belgrade."

"Kosovo and Metohija are parts of Serbia, according to the Serbian constitution, and it has no relation to Albania and never will have," he added.

The Serbian premier said that he had not expected "this kind of provocation" and that his stance on Kosovo was completely different from that of Albania's PM.

Belgrade continues to regard the state of Kosovo - which declared its independence from Serbia in February 2008 - as its Autonomous Province of Kosovo and Metohija, while recognizing the Republic's governance over the territory.

However, Vucic added that, despite the incident, he would continue talks with his Albanian counterpart on relations between the two countries and would also pay an official visit to the Albanian capital of Tirana at a later date.

Albania's PM called on Serbian officials to recognize the independence of Kosovo, which he said was of great importance to security in the region and in Europe.

"We expect that Serbia will undertake all steps in that direction," he said.

"Speaking about Kosovo, we have opposite stances, but reality is unchangeable. Kosovo is independent and recognized by the International Court of Justice," Rama added.

He also highlighted the common goal of European integration between the two countries.

Rama said: "We will not allow history to impact negatively on everything that is in front of us."

"In the Balkans, we need Europe as much as Europe needs Albanians, Serbs, Macedonians and Montenegrins," he said, adding that Europe would "unite Balkan countries on the path of peace".

Albania's PM arrived in his two-day visit to Serbia on Monday morning.

He told The Anadolu Agency that the visit was an opportunity to create a new age for the Balkan region - the beginning of a new history without conflicts between states.

Kosovo has long been ethnically divided by tensions between its Albanian and Serb populations which have led to conflict including the 1999 Kosovo War.