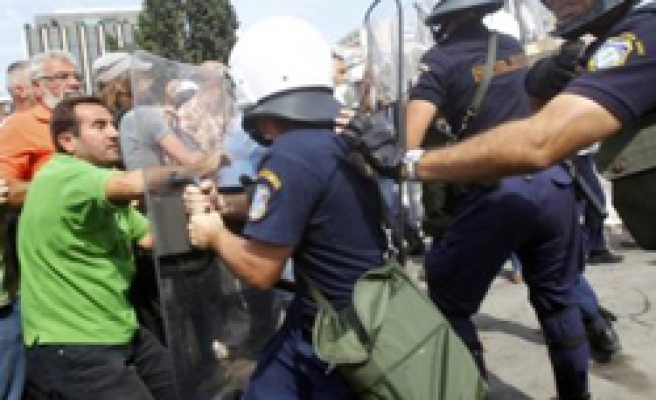 Greek lawmakers opened up road freight to competition on Wednesday, prompting angry truck drivers to briefly block the two main roads to the capital and clash with police in front of parliament.

Road freight is one of the most closed professions in Greece -- along with pharmacists, architects and lawyers -- with no new licenses issued for decades. Opening up these professions is a key requirement of an EU/IMF bailout deal.

Unions say drivers have paid 200,000-400,000 euros to buy licenses, which the new legislation makes almost worthless. The government says the new law makes it easier for only those with old licenses to set up a freight company.

The new law scraps a decades-old system of licences worth hundreds of thousands of euros. Under a system to be phased in over three years, those seeking licenses will be charged only a "small fee" to cover administrative costs.

Riot police fired teargas at some 200 truck drivers after they tried to storm parliament, throwing tomatoes, wooden sticks and plastic bottles to protest against the vote, a Reuters witness said. The situation then quietened down but the truckers stayed in front of the central Athens building.

The truck drivers lifted road blockades they had set up around Athens earlier in the day but raised new ones near Thessaloniki, Greece's second largest city, and threatened to step up action, police said.

"Fearing the political cost and truckers' reactions, past governments have shirked from taking this initiative. This changes now. We are daring to do it," Infrastructure Minister Dimitris Reppas told parliament just before the clashes.

Under the terms of a 110-billion euro EU/IMF bailout the government must propose by the end of the year legislation opening up more closed professions including lawyers, architects and engineers.

Truck drivers blocked the country for six days in July to protest against the bill. Some 2,000 marched to parliament this week, chanting "Thieves, thieves, thieves" and holding banners reading "Hands off our trucks."