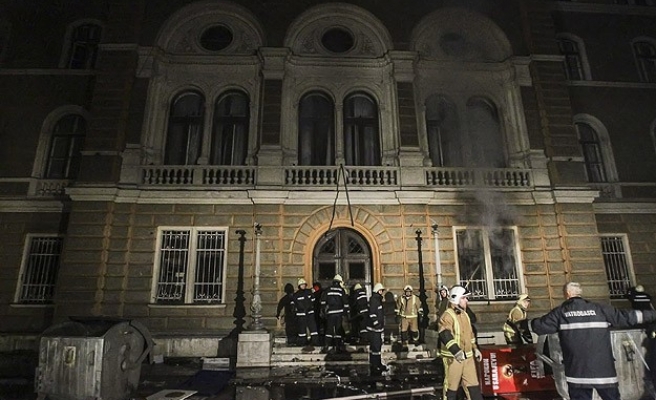 The ground floor of the Presidential building in Bosnia's capital, Sarajevo was set on fire as a public workers protests entered its third day amid clashes between police and demonstrators.

The area around the building was cordoned off by the police and tight security measures were taken as protesters were removed from the area.

The fire has been contained without spreading to upper floors, authorities said.

Meanwhile, the government building and the new municipal building in Mostar were also set on fire.

Previously on Friday, hundreds of people gathered in front of the canton government building in Sarajevo, and threw stones and hurled tear gas canisters back at the security forces.

Protesters broke the security line and set the door of the government building and police cabin to fire. Two police and several other vehicles were also set on fire in front of the Foreign Ministry.

Dozens of police officers and demonstrators have been wounded during clashes that broke out in Tuzla, Sarajevo and Zenica on Friday as the protests started on Wednesday by disgruntled public workers in Tuzla spread to other cities across the country.

The protests that started in the northeastern city of Tuzla and spread to other cities including the capital Sarajevo, Bihać, Zenica and Mostar have been dubbed as the "Bosnian Spring" by the Bosnia-Herzegovina media.

The protests were started by disgruntled public workers, who claim that they have been deprived of their social rights and benefits.

A total of 66 factories were closed down in Tuzla in the aftermath of the 1992-1995 war, and the remaining factories were privatized over the last decade. Thousands of people have been made redundant after the privatizations, and the unemployment rate has hit as high as 48%.

Those who have managed to keep their jobs at the privatized companies are not too happy either though. There have been instances when they have not been paid in months, and their health and retirement insurance premiums have not been paid.

Most of the employed can neither retire, or get treatment at public hospitals.

The disgruntled workers have protested many times before in the past years, but to no avail, as the government has failed to respond to their demands, sparking the recent wave of protests.