The move aims at substantially reducing the refugee flow 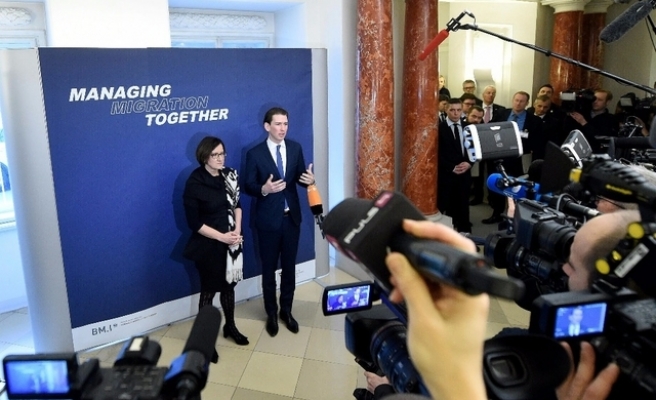 Austria and its Balkan neighbors have agreed Wednesday to tighten border controls and warned they may eventually have to shut their borders entirely.

At a meeting in Vienna, ministers from European Union members Austria, Slovenia, Croatia, and Bulgaria, joined with Balkan states Albania, Bosnia-Herzegovina, Kosovo, Macedonia, Montenegro, and Serbia in issuing a declaration saying, "It is not possible to process unlimited numbers of refugees and applicants for asylum" and limits must be established to protect "internal security" and "social cohesion."

"The migration flow along the Western Balkans route needs to be substantially reduced," said the 19-point document, laying out ways to curb the refugee flow, including refusing entry to "refugees not in need of international protection" and persons "without travel documents, with forged or falsified documents, or refugees making wrongful statements about their nationality or identity."

The declaration calls for common standards of registration and entry criteria for those with realistic chances for asylum, and urges all EU member states to refuse entry to those who do not satisfy the entry conditions.

Austria has recently capped the number of asylum seekers it will accept daily at its borders to 80, and limited the number of refugees it will let pass through the country. That has led to more border restrictions being introduced further south.

Austrian Interior Minister Johanna Mikl-Leitner called for "a chain reaction of reason" rather than a potentially disastrous accumulation of refugees on borders that have been fortified.

"We must reduce the flow of refugees now," she said, "because the refugee question can become a question of survival for the European Union."

While Austria is still in favor of a common EU solution to the refugee problem, the EU needs short-term "national measures" to staunch the flow, she said.

Austrian officials said the joint declaration will be presented to a meeting of EU interior and justice ministers on February 25 in Brussels.

The move to impose joint restrictions in the Balkan region follows the failure of an EU plan agreed to in September 2015 to relocate 160,000 people among EU members under mandatory quotas.

Only 598 have been relocated so far, with former communist members of the bloc opposing the plan and filing legal challenges.

The joint declaration provoked a denunciation from Greece, which was not invited to the meeting and which has been left with thousands of refugees stranded at its border with Macedonia because of the new restrictions.

Greek Prime Minister Alexis Tsipras lashed out at states that "not only erect fences on their borders but at the same time do not accept to take in a single refugee."

Macedonian authorities have been turning away all Afghans and allowing only Syrians and Iraqis to cross at a very slow pace.

But the influx of people reaching Greek islands from the Turkish mainland continues unabated, leaving tens of thousands of refugees stranded in Greece.

"We need a larger political consensus on this issue," Tsipras said, adding that the blockades were causing a "mini-humanitarian crisis" on Greek soil.

"We will not allow our country to turn into a warehouse of souls."