​​​​​​​News agencies based in Balkans and SE Europe talk ‘Peace and Stability in Balkans: How can news agencies play positive role?’ 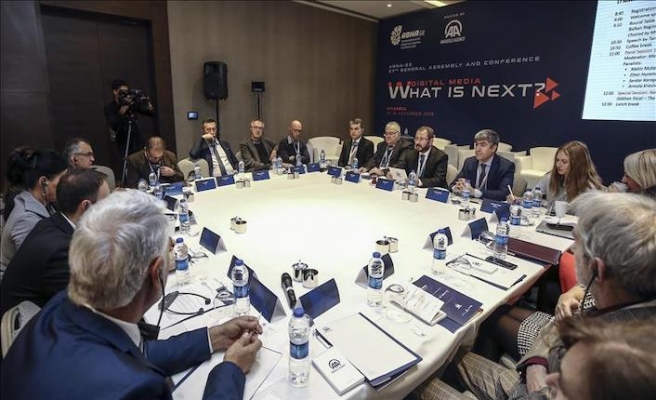 Senol Kazanci, Anadolu Agency’s director general and chairman, made the opening speech to the 27th Association of the Balkan News Agencies – Southeast Europe (ABNA-SE) General Assembly and Conference, on “Peace and Stability in the Balkan Region: How can news agencies play a positive role?”

Kazanci said that the main theme of this year’s two-day conference is “Digital Media: What is next?”

“The main aim of the conference is to review the latest technologies and trends in the digital world and to discuss the contribution [of those trends] to the media industry, especially news agencies,” he added.

“Experts will share their knowledge and expectations with us,” he added.

“The ABNA-SE was founded in order to develop cooperation between news agencies in the region and to help each other on peace, friendship, and security issues in the region,” Kazanci said.

He said that one of the main problems of journalism in the region is seeing journalism as a way to serve various interest groups.

“Anadolu Agency has changed this significantly,” he said, “Our main priority in news has been transmitting accurate and truthful news to our subscribers.”

“With its news from the region, Anadolu Agency has always aimed to be a bridge between Balkan countries, Turkey, and world,” he said, adding that the agency “has made great contributions to spreading positive news.”

Founded in 1920, Anadolu Agency is a well-established global news agency with operations in most major regions around the globe, including the Americas, Europe, the Middle East, Asia, and Asia-Pacific, and serves subscribers in more than 100 countries.

During the assembly, Anadolu Agency will take over the ABNA-SE presidency from the Athens-Macedonia News Agency (ANA-MPA).

The ABNA-SE was founded in 1995 with the aim of developing fuller cooperation among news agencies of the region as well as helping to establish a climate of peace, friendship, security and cooperation in the Balkans, according to its website.

At the conference, Bilal Cetin, the deputy head of Turkey’s Cooperation and Coordination Agency (TIKA), also gave a presentation on the institution’s operations, especially in the Balkans.