Belgrade accuses Kosovo of trying to 'drive out' Serbs

The moves by Kosovo, a former Serbian province that declared independence a decade ago, have spiked tensions between the former war foes. 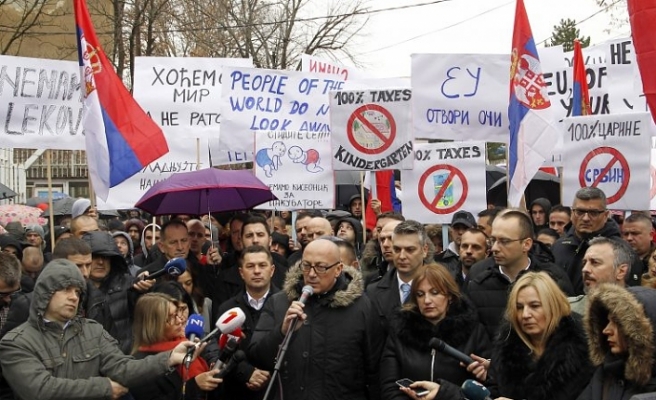 Belgrade on Tuesday accused Kosovo of trying to "drive out" its Serb minority by taking steps to create an army and refusing to lift a 100 percent tariff on Serbian goods.

Belgrade has cast them as threats to Kosovo's 120,000-strong Serb minority.

"It is quite clear that the announcement of the formation of an army and the insistence on a 100 percent tax on Serbian goods are intended to drive the Serb people out of Kosovo," Serbian President Aleksander Vucic said in a statement after meeting the Chinese ambassador.

He warned that the move could "lead to disaster, because Serbia cannot and will not calmly observe the destruction of the Serbian people".

Belgrade refuses to accept Kosovo's statehood -- which is recognised by more than 100 countries but not Russia or China -- and tries to shut it out of global organisations.

Despite EU pressure to lift the measure, Kosovo has remained defiant.

On Monday, Prime Minister Ramus Haradinaj reiterated that the tariff would "remain in force until Serbia recognises Kosovo's independence".

"Taxes are a well-known instrument that we have not invented and that President Donald Trump also uses," he added.

Pristina has also provoked ire in Belgrade by announcing plans to create its own army.

Since the 1998-99 war that paved the way for its independence, Kosovo's security has been ensured by NATO-led international forces.

In October, Kosovo's parliament approved a first reading of laws that would transform the emergency Kosovo Security Force (KSF) into a regular army.

A final vote is expected December 14.

KSF minister Rrustem Berisha said the new laws will see the force's "gradual transformation into an organisation whose mission is to protect the sovereignty and territorial integrity of Kosovo".

The process could take up to 10 years, according to officials.